View Profile
Soumitra Ranade, after making his debut in Hindi films as an animator w 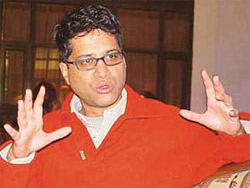 Featured Video
ith Jajantaram Mamantaram, is back with his another film called Friends Forever starring Hrishita Bhatt & Ashmit Patel in the lead. Soumitra has used an animated character named Zampona who plays the cupid between Hrishita and Ashmit.

Motion Capture is been used for the first time in an Indian animation industry. Gold medalist from Sir J. J. Institute of Applied Arts, Soumitra is also working on a fully animated film 'Alibaba - the 41 thieves' along with Jajantaram Mamantaram sequel.

Jajantaram Mamantaram was screened at The Cannes Film Festival and International Children's Film Festival in Hyderabad, 2003. Soumitra has also directed and produced a lot of documentaries.

We wish this talented guy all the best for his future projects and hope he proves his presence felt well in the booming animation industry.