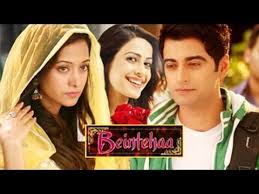 Till now we have seen in Colors TV's Beintehaa that Barkat aka Dimple Jhangiani mixes the poison in the juice which Usman aka Naved Aslam drinks it and suffers from paralytic stroke in the swimming pool itself. But in the nick of time Usman is saved by his son Zain.

The effect of this medicine soon starts and Usman suffers a paralytic attack. Now, for the viewers there are somethings in store for them. Abdullah family will throw Barkat out of the house. Yes! You'll hear it right!

Our sources say, "Aaliya aka Preetika Rao tells Zain aka Harshad Arora about Barkat's wrong intentions. To catch Barkat red-handedly, Zain appoints a detective to follow Barkat. Later that detective gives Zain the details about the actual intentions as to why she had entered the Abdullah family. Zain exposes Barkat in front of the entire family and tells everyone that she was behind the conspiracy of giving paralytic medicines to Usman. Although more, Zain also reveals that she is Bobby and not Barkat. While all this drama is happening, Suraiyaa aka Suchitra Pillai feels Barkat cannot do such a thing."

When spoke to Dimple Dimple Jhangiani who plays Barkat she says, "Yes, Zain will throw Barkat out of the house."

Also, there are speculations that Barkat will re-enter the house with a huge game plan.

Well, this drama in Beintehaa will definitely make the audiences glued to their television sets.

shahz 6 years ago Can't wait for 2morrows episode,But when will we get rid of Bobby for gud seriously can't stand that girls over acting.
Beintehaa Rocks!!!
Luv Harshad Arora & Preetika Rao

Raisa- 6 years ago Finally!!! I am so glad that I don't have to see her OTT acting anymore! That annoying girl is out!! Harshad Arora and preetika keep up the great acting skills!

BlossomingRose 6 years ago Can't wait for this to happen! Thanks for the article! :)