View Profile
After being crowned as Miss Jaipur in 1993, Saadhika Randhawa was spotted by Saawan Kumar Tak, who gave her a break in Bollywood with the much forgettable film Salma Pe Dil Aa Gaye. After the hapless film the gorgeous girl was seen in a movie called Shikar which, too, proved to be a disaster at the box office. Even her item number in Madhur Bhandarkar’s Satta failed to create any impact on the producers as well as on audience. 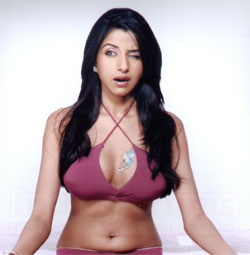 Having failed in Bollywood, the actress decided to try her luck in South cinema. But that doesn’t mean that her hunger for achieving success in Bollywood died down forever. The actress admits that she lost a few good offers in Bollywood because of her inability to manage things.

But now, having learnt the success mantra of exposure, the actress is all set to come back with a bang to make it big in Bollywood.

“There’s nothing wrong to expose as in today’s time all the big heroines are doing the same,” shares the blond Saadhika.

Undoubtedly, the exposure phenomenon is working in her way as the sex bomb has got a hell lot of movies in her kitty like Rajiv Ruia's Love in India, Ananth opposite Govinda’s nephew Krishna and Raj Sippy's Khujali to Aye Watan.

Well, we wish this charming actress all the very best for her second innings in Bollywood.