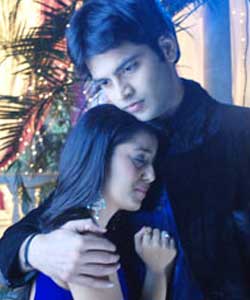 Star One's Yeh Ishq Haaye, produced by Panglosean Entertainment will see a typical filmy ending with the union of Akshay (Raunaq Ahuja) and Manjari (Srishty Rode) happening amidst some high drama. We hear that the climax of the show will be similar to the SRK-Kajol teary union in  the super hit movie Kuch Kuch Hota Hai.

Our source states, "As of now, the Sangeet and Mehendi sequences are being shot. From tomorrow, Akshay's comeback scenes will be shot. In the coming episodes, Sanjay (Devaraaj Singh Arora) will guess that there is something that makes Manjari unhappy. He confronts her and asks her to speak out. Sanjay also tells her in a funny way that he will drag her to the mandap and get wedded to her if she has any hesitation.  On the wedding day, Akshay will make a dramatic entry to wish his close friend Manjari for her marriage. Just before the pheres, Sanjay will let out the secret and tell Manjari that she can wed the man she loves, i.e. Akshay. Akshay does not want to play spoil sport to Sanjay's love, and he leaves the mandap after sacrificing his love. With both the men gone, Manjari is left with the decision of choosing her life partner. She has to do a lot of running before she meets Akshay, and in a very filmy way, the love birds unite".

Yeh Ishq Haaye will have a Maha Episode this Saturday, on August 6th which will be the finale episode.

9 years ago this is gonna be such a cute ending...oh im sooo looking forward to it...cant wait...
i love this show, and i really dont want it to end...
i luv Akshay!!!

OMG! DMGians..please you'll can move into your always at war DMG forum spare this article!

9 years ago Two of the worst shows of this year, one has already ended [love You Zindagi] and the 2nd one Yeh Ishq Haaye is gonna end soon., both these shows failed due to the non-actor, non-charismatic leading actress's that most viewers could not stomach!

+ 5
9 years ago why is DMG being discussed here in a YIH thread!seriously..
please go and discuss youre issues in the DMG forum!

appleridzi 9 years ago thank god this show is ending.
yeh ishq... whatever was not worth watching from its very beginning.
so happy to know that this pathetic show is ending.

n yes DMG IS THE BEST

9 years ago yipee. . akshay is cuming back and Akshay Manjari will unite in KKHH style . . . That sounds great !

Love Yeh Ishq Haaye and Akshay Manjari very much . . . . Wil badly miss them ! awww...Love this cute pic with the article !!!

RAUNAOQ AHUJA - U r the bestest actor for me. Love ur acting and that cute smile too much. Missed u a lot since last few days and wil miss u even more after the show ends. U were superb, fantastic, fabulous as AKSHAY. Wish to see u in new show soon.

SHRISTY RODE - U r a good actress and were too good as Manjari. Had improved a lot. All the best for future. U have a beautiful smile, Keep Smiling !

plz i request people to stop fighting here and giving comments not related to the article...
And sum DMGians...plzzz spare the show YIH now and let it end in peace...
Evrytime any article on YIH, it becomes a war of words...plz stop it !!!!