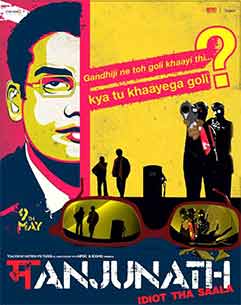 Yashpal Sharma, known for playing characters with grey shade, will again be seen as a villain in forthcoming film "Manjunath" and director Sandeep Varma says the actor's involvement in the script helped to improve his on-screen character.

Viacom18 Motion Pictures' project "Manjunath" is based on the real life story of young IIM-Lucknow graduate Manjunath Shanmugham, who was killed Nov 19, 2005, allegedly after he threatened to revoke the licence of a Lakhimpur Kheri petrol pump owner for selling adulterated fuel.

On receiving the script, the "Gangaajal" actor impressed Varma with his understanding of the villain's role.

"He told me that the character needed some enhancement and together we rewrote Golu's journey, envisioning the integrity of a villain's character who is a central part of the film," Varma said in a statement.

Yashpal plays petrol pump owner Golu who lives in Lakhimpur Kheri. He is a family man with great ambition, but is impatient about life. He thinks everyone and everything can be bought, until he meets Manjunath.

The film will release May 9.

"My character in this series is very powerful and strong": Waluscha De ...