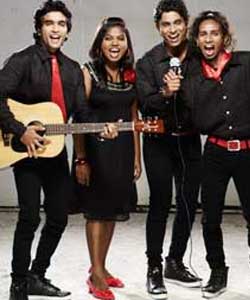 After last week's elimination, Sanjay Leela Bhansali sees another of his team getting eliminated this week in Sony TV's X Factor India.

A source says, "After Deewane group, this week Nirmiti Group got eliminated from Sanjay Leela Bhansali's team. The face off session was seen between Nirmiti Group and Seema Jha from Sonu Nigam's team."

Nirmitee group was known for their madness and individuality in the contest and they had also conducted a Pooja when they saw the danger zone for the first time.

This is the consequent week that Sanjay is seeing another of his team getting eliminated. With this elimination the three judges are left with one contestant each wherein Sanjay Leela Bhansali has Sajda Sisters, Shreya Ghoshal has Geet Sagar and Sonu Nigam has Seema Jha.

The battle now intensifies as the show gets into the final phase...

9 years ago Why geet sagar in final 3.he doesnt deserve this place.i dont know why shreya appriciating him so much instead of his bad singing

+ 2
9 years ago It is up to Sanjay up decide whom he wants from his team to reach the finals. One from each mentor.
He selected the Sajda Triplets over the rest. I doubt they even looked at the actual votes.

9 years ago It is sad to read that Nirmiti Group will be eliminated. Hope that Seema Jha wins amongst the remaining three finalists. She is the most consistent and deserving.

+ 4
9 years ago I was rooting for Seema n Nirmitee. I dont trust the voting trends of this show at all! IT SUCKS!!!!!

Anyway hopefully Seema will win but I dont trust this show at all. Hard to predict what will happen.

Will really miss u Nirmitee and Iam sure its not the last we will be seeing of u. I hope u guys get lots of shows. My whole family really loves you. Lots of love from New Zealand. Especially me

9 years ago SEEMA JHA IS GOING TO WIN WITHOUT ANY DOUBTS, SHE IS GOOD.

9 years ago only seema is deserving in this 3 .. geet sagar should have gone from the second episode. he does not know how to sing.. sajda sisiters are ok but nirmitte group was most talented ...

9 years ago Honestly, it' SLB & Sonu's karma biting them back. Agree, Geet is not the best but he still did not deserve the rudeness and attitude he constantly got from the above two judges, especially when they always overlooked the mistakes of their own team. I think Seema should win but if Geet wins, I'll be happy to see SLB hit the roof :)

+ 8
9 years ago No next season of X factor please ! Indian Idol is much better than this show !!

9 years ago GEET SAGAR? i don't believe this. They eliminated many great singers. They shoudn't what if they dint performed good for that day but they are well Amazing singers over all. I only like seema jha. Nirmiti and Deewana Group was much better then SAJDA sisters. Still I wish all best of luck but i am *DISSAPOINTED*