After passing all the family hurdles Nishikant (Romit Raj) and Pragya's (Priyamvada Kant) courtship on Colors TV serial Thoda Hai Bas Thode Ki Zaroorat Hai is all set to blossom in to marriage in a typical Maharashtrian style. Mehndi and Haldi ceremony have already been completed and now the Kulkarni family is keenly looking forward for the matrimony of their youngest son. 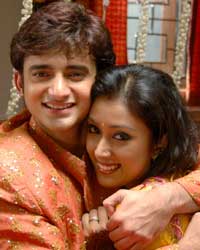 But as observed Pragya's character has been observed to have a grey shade and she is being portrayed as a double faced girl who on one side tries to woo the Kulkarni family and on the other side plays mind games with Nishikant.

So in such circumstances will the marriage preparations be executed smoothly?

A Little Birdie informed us that, "On the wedding day Nishikant's father, Ramakant  Kulkarni takes charge of his son's wedding and spends on behalf of the bride's family also. On seeing this Pragya's father gets embarrassed and hands over a sum of money to Ramakant but Pragya interprets this in her own way and thinks that Nishi's family has asked for a dowry."

Our source also adds that, "Annoyed by the scenario Pragya as usual conveys the matter to Nishikant with a pinch of salt and he in infuriation even call's of the wedding. But eventually after much drama they two do get married."

So watch out for their marriage episode tonight on Color's at 7.30pm.

yudiz_lilprince 12 years ago Shesz sOo cool and pwettyy. she came tew New Zealand and made a moviieLove has no language. ! It waz AwesOme.

+ 2
12 years ago hahaha. i feel her pain! i''m unlucky in love too! oh well, i still have some more years left before i need to lament and cal it quits! lol

she seems really funny though! love the last line! hahaha.

+ 2
12 years ago I know a girl''s best friend are diamonds. But she needs a posh car to get to the jewellery store...hahahahahahahahah...