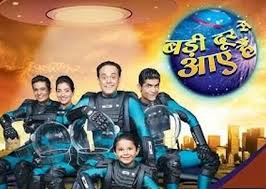 The upcomming episode of Badi Door Se Aaye Hai will feature a story on the pre-monsoon weather, a time when people fall ill in all probability as the moisture and humidty reaches the peak, leave alone mosquitoe bites!

The episode will feature how one of the aliens, Vasant Ghotala (Sumeet Raghavan) falls ill and will be asked to go to for a medical checkup for the same.

The story will witness a major turn around of events when Vasant is asked to go through a blood test, the reason being the fact that he is an alien and his body is not made of flesh and blood!

While Vasant will try his best to avoid the blood test, the doctors will try and convince him to do the opposite.

We called Sumeet Raghavan who said, "I do not have any details of the upcomming track."

Stay tuned to watch the episode this weekend!

+ 2
5 years ago I am sure the truth wont be out so soon , it will be interesting to watch though

5 years ago Looking forward to this track soon

+ 3
5 years ago Looking forward to the track.I am sure vasant won't get his blood test done.The world won't come to know about these aliens so soon.

5 years ago haila what a track awaiting this for sure as ghotalas wud find ways to hide their identity.. track looks good now