The dreaded Saturday has come yet again! After Tapur’s shocking elimination last week, the tension and nervous energy is on a high among the contestants, as it is the Junta who has the ‘Final Say’.

Featured Video
With the celebrity contestants being popular in their own fields, the going gets tough from now on! Mir Ranjan Negi has his own Chak De moments, while Cyrus’s laughter riots cannot be missed. For Ronit, Prachi, Jay and Sudha, votes come in for their fabulous achievements on the dance floor as well as on the acting front. So seeing all this, who do you think will be in Danger Zone this week? Mini Mathur as an anchor is fabulous, but will her votes speak for her in Jhalak? Can Toby’s luck keep Sonali in the race for long? Sandhya surely burns the dance floor, but will her popularity reflect in the vote count? Each one's fate hangs in the balance as the third elimination nears.

May the best ones stay on. But after Friday's delightful display of dance, it is going to be extremely difficult to tell who deserves to go this week. Only Luck and God can help! So come Saturday night and we shall know whose Luck held out and whose did not.

Catch the Saturday night fever at 9.00 p.m. Jhalak Dikhhla Jaa—Dancing with the Stars only on Sony Entertainment Television .

Sandhya Mridul made an appearance with her choreographer Javed at the Jhalak Dikhhla Jaa dandiya organised at Kora Kendra, Borivali.

Can Mata Rani shower her blessings on Sandya and keep her out of Danger Zone this week?

Not Out till Votes come in – Mika Singh 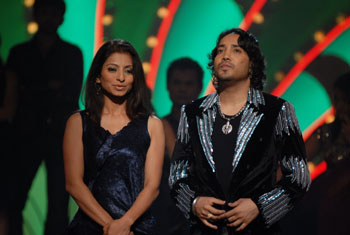 Mika and Cyrus Broacha have one thing in common – they are never stumped for answers. During the elimination round when the judges were asked to name one contestant that they believed should rightfully be voted out… they were unanimous in their decision… Mika was the common refrain. The contestants too had named him in their secret ballot. Mika of course had the last word. " Mujhe khushi hai ki sabke hoton pe mera hi naam hai…I am glad that my name is on everybody's lips!" He had the last laugh on this one.

Will Mika be saved this time around by his fans, find out on Jhalak Dikhhla Jaa, this Saturday, October 20 at 9.00 p.m. only on Sony Entertainment Television.

Is Cyrus the Dark Horse in Jhalak? 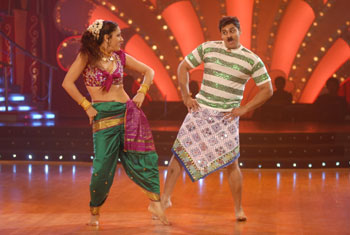 Cyrus Broacha may act like he doesn't care much about dancing and keeps making fun about his own performance hoping aloud that he is the one to be voted out, but in reality that is the farthest from the truth. He is definitely putting his heart and soul into his rehearsals, though it looks like buffoonery with his non-stop chatter. Cyrus has been showing amazing improvement each week and may well turn out to be the dark horse of Jhalak Dikhhla Jaa. In fact Shiamak Davar said, "I won't be surprised if he even wins!" After all dark horses are the ones winning titles these days.

Will the serious about dance Cyrus stay on to entertain in the show, watch the results, this Saturday , October 20 at 9.00 p.m. only on Sony Entertainment Televsion.

14 years ago Thanks for the article. Prachi and Jay dance well, I hope they win this competition :)

angel26 14 years ago He does not know how to dance and is so irritating. He thinks very highly of himself and does his naatak such as crying on the show to emotionally blackmail his fellow kind.

Why was Ronit Roy in the danger zone?

+ 3
14 years ago it was really sad to watch mini go out
she was getting better & good.

Mika should go out he sings to much dances less

supriya09 14 years ago mike should be eliminated this week...please vote for prachi desi aka bani dixit walia [from kasamh se]..prachi is the best:)

+ 3
14 years ago Actually yesterday all of them danced well, but Mika should be eliminated this time... it's only fair, I think.. thanks for the article!

14 years ago it should be Mika he is soo melodramatic its annoying, his partner is such a bad dancer and choreagrapher but i heard in JDJ thread its Mini dat goes out :'(