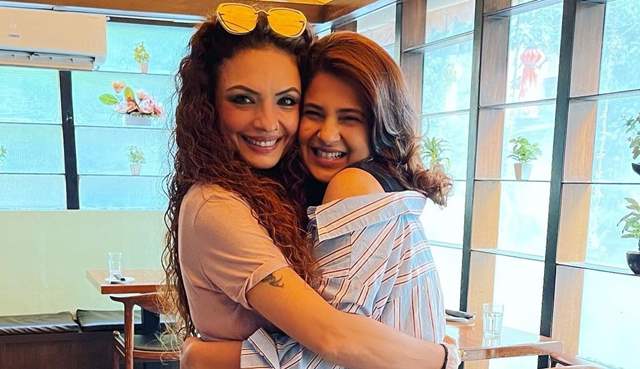 Sony TV show ‘Beyhadh’ was much-talked about shows. The show witnessed Jennifer coming back to TV screens after a gap and people were excited for the same and the show proved it’s worth and entertained the viewers. Jennifer’s character in the show received immense love.

While the show didn’t last very long, the bond created on the sets of the show is still blossoming. The onscreen mother daughter duo played by Kavita Ghai and Jennifer Winget still make time to catch up with each other and it seems like their bond is quite thick and pure.

India Forums got in touch with Kavita Ghai and asked her about the bond with Jenny, the actress was reluctant on the same initially but shared her thoughts later. She initially said, “I usually refrain myself from sharing with people about my friends because I’ve lost many people because of the evil eyes. I don’t want my relationship with her to go kaput and thus I don’t wish to speak on this”.

We convinced her that our avid readers will only pass on their good wishes and good vibes on to the duo and that’s when Ghai budged and spoke about the cute bond that they share. She said, “Honestly, I don’t even know how and when our bond grew so strong. Jenny shares the same sun sign as my younger daughter and I know the traits of a Gemini and I know when to talk to her and when to let her be. I did just that. I didn’t pester her like other co-actors. I gave her the space and talked only when it was necessary. I feel Jennifer is very different, not like a lot of other leading actresses who have a huge group of friends. Jennifer has a close-kint circle and she is not that social. I am very friendly and make many friends but she always asks me to chose the people I trust and talk to”.

She added, “I played her mother in the show but in reality, she is my senior and have been in the industry for more than a decade. I got to learn a lot of things from her. My daughters are away from me and thus I see my daughter in her. She still calls me ‘mom’ but whenever she has to put across something strongly, she addresses me as ‘K’. She would like ‘K, here you are wrong’. I love her and I hope the bond remains the same”.

+ 4
5 months ago I didn't know Jen is a Gem as well. & this is so sweet. God bless their friendship.

5 months ago So sweet. Really admire Jennifer as a person and fab actress.

+ 6
5 months ago so sweet...its so nice to see when these friendships turn into bonds off screen...like the cast of IPK or Ayaz & KSG.

+ 11
5 months ago sweet article, nice of her to share her bond with Jennifer with IF