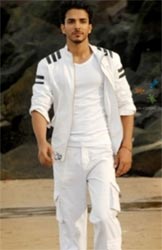 We have seen Hrithik Roshan essaying the role of Akbar majestically in the magnum opus movie, Jodhaa Akbar. However, not all know that the tall and lanky Manit Joura who is seen playing the role of Vicky in Zee TV's 12/24 Karol Bagh was a stand-in for Hrithik in the movie!!

Manit shares the amazing experience of being a stand-in for the actor with Telly Buzz. "Stand-in is actually the person who is between the actor and the camera person/light man before the actor can actually stand his position to give the take. It is this stand-in who will decide the position in which the shot has to be taken. I was chosen for this particular role as I am of the same height as Hrithik, and also have the same hair style as him".

In addition to the stand-in scenes just before a shot is taken, Manit also did the horse riding sequences, the long shots etc for Hrithik. "It was a complete learning experience for me. I learnt a lot about technicality, which will help me in the future too. It was a great honour to stand in place of Hrithik in such a big film", he signs off.

Well, it surely should have been a moment to cherish for Manit!!

+ 3
12 years ago great news to know..we know half only about shootings!!! This manit is good looking except his lips...lady lips!!! but acting good in karolbagh...goodluck to him