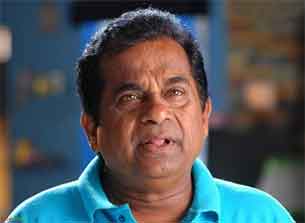 Telugu comedian Brahmanandam was mobbed by thousands of fans recently when he came here for the idol installation at Pathur Veerabrahmendra Swamy Temple. He left the venue soon after unveiling the idols.

"He was invited to unveil the idols Govindmamba Sametha Veerabrahmendra Swamy, Srimat Kalika Devi and installation of Sri Nandeeswara Dhwaja Stambham. We tried to keep it a low key affair but the public got to know and showed up in thousands," Chandrasekhar, organiser of the event, told IANS.

"He was supposed to address the gathering after unveiling the idols but he was so irked by the behaviour of the crowd that he left very quickly. The police had to intervene and control the mob which tried to approach Brahmanandam," he added.

The 58-year-old actor has appeared in over 1000 films in a career lasting over two decades. Some of his best films include "Aha Naa Pellanta", "Appula Appa Rao", "King", "Ready" and "Balupu".

He is also a recipient of the Padma Shri award.

Kangana Slams Anushka for Raising her Voice Against ...
22 minutes ago

'RadhaKrishn' Fame Vaidehi Nair Roped in For 'Brahmarakshas ...
27 minutes ago