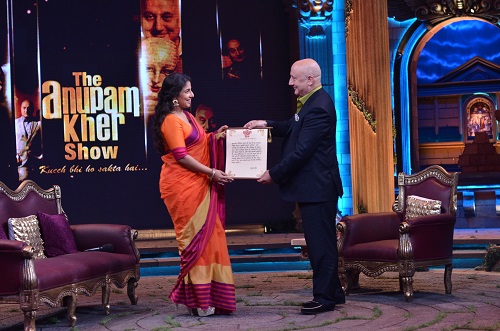 Colors' popular talk show The Anupam Kher Show - Kucch Bhi Ho Sakta Hai is going to have a new guest this week and she is none other than the beautiful and talented actress Vidya Balan.

We heard that, "This time, Anupam Kher welcomed Vidya on his show and the first thing which he told to Vidya was "Vidya, I am a fan of yours" to which Vidya blushed and said, "But sir, I am your fan." Vidya and Anupam admired each other's work on the show and Vidya admitted that even though she has met Anupam so many times earlier, but she never believed Anupam when he said that he was her fan."

Further, we heard that, "Anupam also praised about Vidya's film Kahaani and after that Vidya revealed that even Sujoy Ghosh has respect for Anupam to which Anupam said, "Why do you think I do this show? To work with you and Sujoy... Aakhir kaam hin kaam aata hai!"

6 years ago Anupam has a acting, yet his show has no zing...total bore!