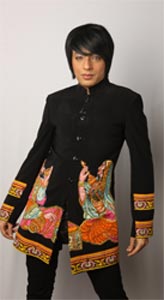 Why did you decide to enter Bigg Boss House?
I got this offer for the last two seasons too, but I was not mentally prepared. This season the main reason was Mr. Bachchan who is very interesting. Another reason is that I wanted to experience reality shows so I took this show.

How was your experience in this show?
I want to say my whole experience was like a Vegetable with both good and bad memories.

What are good and what are bad?
Good is I entered as an innocent, shy, fun loving guy and later on I was trapped in people's nomination and I got into plotting. People started using me emotionally.

Didn't you realize that people were using you? We saw that after you realized you started regretting?
There is a difference between regretting and realizing. Whatever I was doing was unknowingly done. The atmosphere was created. Imagine in a house you are trapped with 13 unknown people. You forget your individuality. First of all the prize money is One crore rupees which is a huge amount, plus the week you stay you get paid. So people tend to think how it is possible to stay for one more week.

Do you think the clipping that was shown by Bigg Boss was the reason for you to get nominated?
Yes, it was one of the reasons that I got nominated but I deserved it. I was playing wrong. You should also be proud of me as I was the only one who stood up and said that yes I have done it and said sorry, whereas Vindoo and Raju were not at all ashamed of whatever they had done. I was the only person who is not from the industry and never faced camera. Whatever I did was a mistake and I regret it from my heart.

But how much is money important to you at this point of time?
Money is not at all important to me at this stage. I am a happy person. Definitely winning is important. You are in a situation where people are only discussing nomination and winning. That situation is important.

Could you describe one typical day at Bigg Boss House?
We used to get up at 8'O clock, have breakfast and then we used to cut vegetables only. There you cook and you bitch the whole day and I have done most of washing plates and cleaning. I have done major cleaning work of the house.

There were rumors that you are not a fashion designer but a fashion choreographer?
Yes, I know when I came out I heard this was printed and I laughed at such things. I have done many shows and I don't have to prove it. You can Google search Rohit K Verma and you will get details about my shows also on Facebook.

What is the greatest thing that you have learnt from the house?
I am going to make my own decisions. I was completed used in the house. I was between two groups. I believe what I think. It's not an easy game. You people watch just for 45 minutes but we stayed there in front of the camera 24/7. At one point of time I became suicidal. I went to the confession house and told Bigg Boss that I want to commit suicide. After that only Bigg Boss gave that mental asylum task and my clipping was shown to make me feel better.

Who is the villain in the house?
Do you want me to name that person? Everybody knows about Vindoo. He is a big @$$#0!*.  A double faced man.

What's after Bigg Boss?
I am going out as a changed Rohit Verma. I'm waiting for more fashion shows and am also hopeful of a wild card entry to bajao people inside again.

What about Kamal Khan?
Who is he? I don't know him and I have never seen him.

What about Tanaaz and the misunderstandings that happened between you and her?
Everything is fine now. I had a word with her and we also went out for dinner together.

Is it necessary to play games inside?
It's not. It's about human attribute towards life. It's a Psychological game. If somebody keeps 1 Crore in front of you, ache se ache ki neeyat kharab ho jati hai (the most pious person's character is lost). People say it's scripted but everything is very true. I have done mistakes but everything is fair in game and war.

appu_appu 12 years ago He is such a big lier...he said he is not in contact with his family...and his mother and sis were just shocked...

12 years ago May be we should give him, the benefit of doubt as a changed person. Hope he has changed at least for Poonam's sake

12 years ago how is he going to "bajao" everybody if given a chance to re-enter as a wild card entry, i wonder. maybe with the ganga-jamuna flowing from his eyes again....

god only knows.....what ingredients went into creating a terrific personality like him....i am unable to understand.