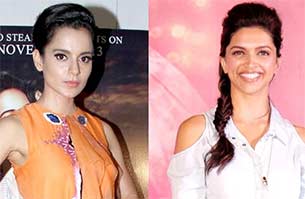 Actress Deepika Padukone, who was on a roll with one hit performance after another in 2013, is jealous of another actress! She is in awe of Kangana Ranaut's work in the recently released "Queen".

"I have seen 'Queen' and I am jealous of her performance, I think she was outstanding," the 28-year-old said here Saturday at the HT Mumbai Most Stylish Awards.

"What a beautiful film. I think if you are a woman and have been in a relationship, just the way he has captured the emotion of the girl and the way he has portrayed it, it's one of the best films I have seen in the longest time and it's outstanding," Deepika said.

"Queen" hit theatres March 7 and is getting rave reviews from both critics and audiences. It also stars Rajkummar Rao and tells the story of a girl who goes for her honeymoon alone and captures her journey of self-discovery.