Mumbai, Dec 28 (IANS) To Tushar Jalota goes the dubious distinction of being the last debutant of 2007 in Mahesh Bhatt's 'Showbiz'. However, the newcomer suffers from no insecurity and is ready to field any level of criticism.

'Showbiz', a desi take on the Hollywood film 'Paparazzi', is about the paparazzi in Mumbai overstepping the line of decorum.

'I play an out-of-towner who wins a talen 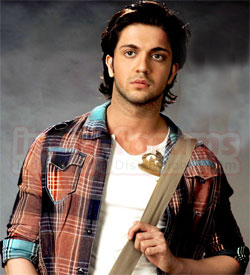 Featured Video
t contest named 'Voice Of India' and is then targeted constantly by a section of the press. Yes, we've dared to question the ethics of a section of the press. And for that we're willing to suffer the consequences. In fact, I suspect some papers will either not review our film or give it a bad review. That's okay,' Tushar told IANS.

'Mahesh Bhatt saab has always had the guts to take on sacred cows. I couldn't have attended a better school of life,' gushed the newest newcomer in tinsel town and adds that some of the incidents in the film are identifiable with real life events.

'But we mean no harm to anyone, or cast aspersions on any institution,' said the newcomer who is happy to be part of the Bhatt camp.

'If the others are star children with fathers and godfathers, I'm the product Mahesh Bhatt saab's Vishesh Films. In fact, Mukeshji's son Vishesh and I have been in school since kindergarten. That's how I got into Vishesh Films,' said Tushar.

He assisted the Bhatts (Mukesh and Mahesh Bhatt) on as many as six productions before getting a break as a leading man in 'Showbiz' which opened Friday.

'And here too in my debut film I did everything from serving tea to fixing the light to helping the directorial assistant. So rather than feeling disadvantaged as the last debutant of 2007 I'm feeling extremely privileged. Because I know more about camera, angles and lighting than the average newcomer.'

'Yes,' he laughs and says. 'I auditioned Mrinalini. She then ended up doing Vishesh Films' 'Awaarapan' first. That was more time consuming because it was shot abroad.

'The film took a little longer to complete. But I'm happy. The delay gave me a chance to learn on my job. Now I feel scared about the future. Will I get producers who make me feel as comfortable as the Bhatts?'

'We were both new and eager to learn. We've put everything in 'Showbiz', including love and sex. But it's not a run-of-the-mill film, and it isn't a high-profile unconventional film either.'