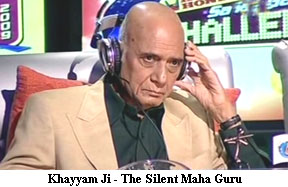 Featured Video
SaReGaMaPa this weekend was entertaining. But certain acts were surely “out of tune”. Besides the energetic performances of the contestants, this week had the impromptu medley performance on Pritam’s songs by the gurus and by Shankar Mahadevan-Kavita Krishnamurthy on “Ke Sera Sera”. This easy camaraderie on the sets between the host, the gurus and the contestants make the show very enjoyable despite the few flaws that it possesses. Himesh went “tearful” yet again! After “Topi” then “Roti”, will this series concentrate on his “Aansoo O Ke Moti”?  Mahaguru Khayyam Saab simply endorsed the comments of the guru’s and the other Mahaguru Kavita Krishnamurthy, instead of giving out any musical tips to the participants. Khayyam Saab once again found himself embroiled in yet another elimination controversy just like in the previous series. The elimination of the female participant raised quite a furor and this brought into focus the disparity in judgment. What was the basis of elimination - that day’s performance, the previous performances or entertainment factor over perfection in sur and taal or was it some other factor? Kavita commented last week that she had based her judgment on both the days’ performance; while this time she said she rated them on Saturday’s one. Why this disparity? How fair is it on other contestants when the Gurus make few contestants sing other songs to showcase their extra capability when the rest don’t get that privilege? 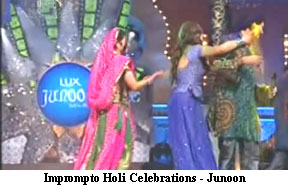 The NDTV Junoon Kuchh Kar Dikhaane Ka participants gave a brilliant performance on both the days, perhaps the best out of all the musical shows. Wish the same could be said about the production team or for some of the judges’ acts here. The disparity in marking by the judges surfaced in this show as well. While some brilliant performances received low scores from judges, some “not so brilliant” performances received brilliant scores! Why can’t the judges’ rate on performances instead of looking into which genre they are voting for? The most shocking part of the show was the AV display for Anand Raj Anand where some viewers questioned his acts. Some of the comments in the AV were really distasteful and neither Antra nor Anand needed to face them on International TV. Why subject Antra to such public humiliation? How far will the production team go for such publicity gimmicks to draw public attention? The return of the eliminated contestant Ali Akbar who came back by wild card entry however was indeed one happy moment after so many tense moments for the day. If SaReGaMapa saw impromptu medley by the Gurus, then Junoon saw Holi celebrations bringing more fun and masti on the sets. 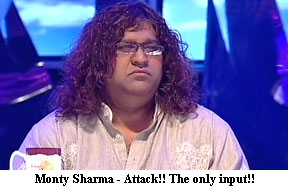 In SVOI the Friday episode was enjoyable but the Saturday episode left a lot to be desired. The performances were mediocre and the judges were consistently inconsistent in their marking. The disparity in rating by the judges yet again brings to focus the question that is haunting most music lovers – what is the basis of rating here?? How can a performance receive 9 points from one judge and 6 from another?  Ismail Darbar seemed on a charity mission showering high marks even for the most ordinary performances. Sukhwinder told off Shraddha for singing below par and requested her to sing the previous week’s song which she did brilliantly and was given 10 by Sukhwinder. So what was the basis of the marking? Monty had no musical input and seemed happy to only “ATTACK”!!! The echoing “Attack” cry is now turning more of a sore thumb. From this week the public voting will start. It was informed by Shaan that the voting lines will remain open for two hours just after Saturday’s show starts. Will that be fair to the participant who sings last and gets very little time to appeal and get votes as opposed to those who sing towards the beginning of the show?

Disparity in ratings and decisions is indeed a point of concern. When the lack of public votes eliminates a talented contestant, one can blame that on publics’ lack of musical knowledge. But when elimination occurs from a knowledgeable person due to lack of clarity in rating then who should be blamed - the contestants’ bad luck, the judges’ disparity in rating or the production house’s unclear rating format? It is an issue that needs to be addressed immediately, or else, we will continue to do “Suron Ke Saath Samjhauta”!

+ 4
14 years ago i wish that the producers of the show get to read these reviews too.

14 years ago your analisis regarding SaReGaMa Pa is excellent, over all very good

14 years ago This time in SaReGaMaPa, Himesh is sitting with glycarine bottles.......perhapes he wanted to show his fans how hansome he looks when he cries. Abt Shankar Mahadevan-Kavita Krishnamurthy on “Ke Sera Sera”, its awasome. Enjoyed this week's show but I felt bad when that gujju girl from Pritam's gharana was eliminated instead of goa girl.

14 years ago Thanks! Great analysis... as always enjoyed reading it!