Ajay Krish who was earlier seen in serials like Mamta and Ardhangini has been in the audiences' eyes for nearly three years now. But now, the actor finds himself at crossroads, and like many other popular and experienced actors of television industry, is looking for a good offer. 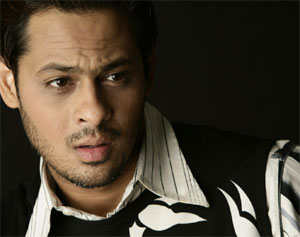 Featured Video
Talking to Telly Buzz, Ajay opens up and talks in length about what he feels of Television today. "Television is now in a very confused phase wherein all are experimenting with various things. After the success of Balika Vadhu, gone are the days when saas and bahus used to rule the prime time slots. We are now at a stage where all want to go behind the social concepts".

Ajay feels that even before Balika Vadhu, Saat Phere started with addressing a social issue of a dark complexioned girl, but that show was picturised quite differently. "Having said this, I have no qualms against Balika Vadhu. In fact, I love watching the show; it is brilliantly made with good original content. Even for the matter of fact, Bidaai has a good story line with strong production values. But apart from a set few, many shows across channels are not coming up with originality", expresses the actor.

In this phase of recession and slow down in economy, the problems that experienced actors are facing is that, they are not being offered a decent budget by producers. "I have been getting so many calls from production houses, but after all the procedures, all I am hearing is that 'We are looking for newcomers' or 'Your budget does not seem good to us'. But being in the industry for so long, we have got to know from inside sources that most of the producers and channels are now opting for newcomers in every new project as they can pay them the minimum and get work done. The thought process is like, 'I can get 3-4 newcomers with what I pay this one known actor'", states Ajay.

According to Ajay, "TV shows should give the viewers a right mix of concept and acting, but nowadays all is getting so concept driven, that there is no value for experienced actors who can carry the show on their shoulders".

"Why is it that Ronit Roy is tagged to be a 'Complete TRP Package'? It is because of his acting prowess and the versatility that he has shown till date. Take a look at various new shows across channels which feature newcomers. Many of them are not doing well because the so-called new faces are not appealing to the eyes of viewers. I am not against the new faces, because I too was once upon a time new to the industry. But my point is that, for any show to do well, you need to have a right mix of experienced actors as well as newcomers. Take for instance the successful youth-based show Miley Jab Hum Tum. They took a good mix of known and new faces, and today they rock as a team!!", vents out Ajay.

Last but not the least, Ajay Krish accepts that all actors need to understand the slow down in economy. "I have also revised my rates as per the situation, but it is really disheartening as we, the already known faces of television feel disconnected from the industry. I am now getting the feel that the span of an actor in television is very limited; I just hope things change for the good because leave alone me, there are so many good actors today who are left with no good show", concludes Ajay Krish.

SNBR 12 years ago I fully agree with Ajay Krish. Jatin Shah is my favourite, Ekta is making so many serials but all new faces are coming & not Jatin so sad.

sawri 12 years ago he is absolutely right! production houses are going for new faces, just to reduce the cost and can use them completely.. we are misssing good actors

12 years ago Great interview!!really brilliant..he is right known actors aren''t getting any good roles anymore..ya we need newcomers too coz we always need to find new talents which is refreshing..but make good mixture of both newcomers and experienced actors n make sure that older ones don''t go jobless when new ones arrive

+ 4
12 years ago i love interviews like these!!
they seem sincire!!

+ 3
12 years ago Omg i never thought about this!
& Yeah i do miss some of the old actors, we hardly see them!

+ 5
12 years ago This is an EXCELLENT interview.

He is absolutely right.. u need a balance between new comers n known actors.. and the best example is MJHT.. the show rockz.. cuz the show has fresh and known faces..

12 years ago gr8 interview!!
i agree with him and mjht rocks!
hope 2 see him soon in a new show!

mariaoo 12 years ago he is right!!
but newcomers don''t steal d show completly
u should have some x factor even though ur new or old
for example KARAN SINGH GROVER
he gained popularity much after his debut serial
choosing a correct role is also important than just doing shows

12 years ago He is completely right. You can''t have a show with only new actors..You need to balance it alot...Channels are so into new young faces and when they can''t act well then the storyline suffers and the show is gone. He is very right