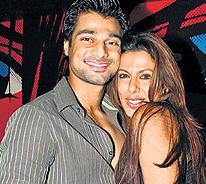 This season of Nach Baliye (NB 3) sees some of the best Jodi’s competing against each other.One among the ten Jodi’s this season are the much talked about couple; Pooja Bedi and Hanief Hilal.

There have been lots of speculations doing round that Pooja and Hanief’s combination have an unfair advantage of being part of an earlier celebrity dance show competition. Ask Pooja about it and she says, “After seeing others perform in NB3 we don’t have any unfair advantage, I guess all such speculations should be put to rest. I mean there are such great performers this time around that unless we perform our best we can’t survive in the show.” 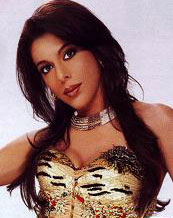 Looking fitter than ever, and ready to take on the challenge, Hilal adds, “We are working extremely hard to compete with other Jodi’s who are exceptionally great dancers.”

Accepting that dancing is her passion, Pooja Bedi further admits that she is keen on doing cross over films too. Says she, “I have been getting offers for quite some time to be part of cross over films but I never gave it a serious thought. Now, after my commitment with this show ends, I would surely love to do some films apart from hosting some more celebrity chat shows.”

Hanief, on the other hand has few bollywood scripts in his hand apart from modelling assignments. He says, “I am focussing on NB 3 at the moment and in the meantime making sure to grab the right script before making a plunge in bollywood.”

rajul_mishra 14 years ago Dancing is her passion!!!

She was really awful in Jhalak dikhlaja and was one of the first ones to be voted out.

14 years ago wasn't haneef her choreographer in jhalak dikhla jaa???

14 years ago I don't think they have an unfair advantage, they just have more chances of going further along but with other great dancers like Karan and Vikas it may turn into a real competition at the end!

+ 2
14 years ago I don't think it'll be easy for them competing against Rakhi & Abhishek jodi...both r awesome dancer.

14 years ago Looking fwd to the show... No personal favorites around this time as the show starts... but I am hoping that there are good dancers out there :)

shes pretty. whatotyher show was she in?