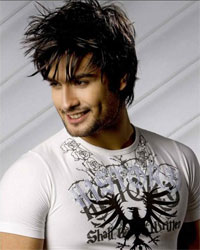 Vivian D'sena, one of the leads of Balaji and Star One's upcoming show tentatively titled Fanaa, had a petrifying experience while flying from Indore to Mumbai a few days back.

Vivian says, "Our flight was suffering from bad weather so when we touched down at Mumbai airport we all heaved a sigh of relief. However, to our immense shock the plane took off again and started circling the skies."

Vivian continues, "This was horrifying. The last thing we wanted was this. This take off also triggered confusion and chaos amongst everyone in the flight. Not to mention worry and fear. I too was affected by this mass fright."

In his fear Vivian started murmuring prayers for providence. "I told God - Just now I signed a very good show God and I want to do it. Please don't let anything happen to me, not now," Vivian repeats his fervent prayer.

The flight thankfully landed safely, and the relief and gladness in Vivian's voice is tangible. "After doing turbulence filled rounds in the sky, eventually the pilot announced that we were landing, this time without a sudden reverse (laughs) and we did land safely. This experience really made me incredibly thankful for my life," says Vivian.

Vivian was last seen in Colors' Gangaa where his character ended abruptly. Now, the actor is getting a big platform like Fanaa to showcase his talents. He is paired with the gorgeous Sukirti Kandpal. Recently, Vivian's co-star in Fanaa and debutant Vikas Goopta praised the chemistry between Sukirti and Vivian saying – 'Vivian and Sukirti Kandpal are the leads of the show; they are rockstars and they are looking magic together!'

We are glad to have Vivian back in one piece, aren't we?!

xxAqeelahxx 7 years ago Love you Vivian, omg that must have been so scary ... thank god ...

Vivilaciouss_me 9 years ago Lol! So swit swit! 100 kisses to u fr ur swit prayr! Luv ya!

Aurum 10 years ago he looks so cute. i totally think he and sukirti are going to love perfect together =]

ramita94 10 years ago its not even called fanaa anymore so great ekta again has used her idiotic brain and named it something so long and crap 'pyaar ki yeh ek kahani' which just puts me off!