The topic for this Sunday, September 13th episode in Farah Khan hosted Tere Mere Beach Mein on Star Plus is Socha Na Tha….. 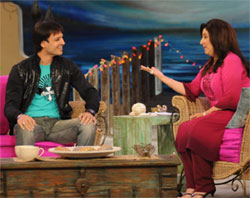 Featured Video
All the three guests who came on the show Ritesh Deshmukh , Vivek Oberoi and Sreesanth  were chosen, as they had committed mistakes which they never thought would have such a huge impact in their lives and would create some major controversies. Watch them clear the air for the first time on Indian television and show viewers how they've learnt their lessons and moved on in life.

Vivek Oberoi's relationship with Aishwarya Rai would go down as one of the most controversial ever, simply because it made him a national villain, his career came to a standstill and he lost his friends…

Vivek came out in the open about his ill famous press conference in which he had accused Salman Khan of threatening Vivek because the latter was in love with Aishwarya Rai at that time. He reveals the situation that led to it, his feelings at the infamous prss conference, the famous 41 missed calls, the backlash he received and how he overnight became an outcast in the industry in which he had just seen success and hailed as the talent to watch out for!

Farah: What exactly happened? There are some who know some part of it & others the rest… you please tell us?

Vivek: There was too much happening, threats were coming, indirect pressure tactics were being used and I was tired of it …I tried to phone and even go and meet and settle it.

Vivek: Salman. My dad was also out of town then…Had been there, he would have rightly advised me….Shayad agar woh hote to sala leta. Lekin uss waqt kuch log the, jo mere kareeb the aur mujhe rai de rahein the.

Farah: This happened over night?

Vivek: Yes..There were few who called up saying that I did the right thing..but they also soon disappeared. Suddenly there was no one to back me, and those who had asked me to do this also walked away saying that this is no longer their responsibility.

Farah: Yes there was such a huge backlash against you…

Vivek: and I was like…but you're the one who asked me to say all this? There were many such eye openers then…This was just the beginning…it just continued…I was made ridiculed of at every award function, made fun of!

I got this letter from the organizers of an award function that I'd won the award for 'Company'..and then I was told that I shouldn't attend it and later that award was given to someone else…I said I had the letter! I was fed up…I had only one goal in life, act in films but when this incident happened, people were told not to work with me.

People started asking me to return the signing amounts saying that they can't do the film with me coz they were facing pressure from here and there..

What I did was very wrong but I didn't kill anyone, neither did I harm anyone, I did not hurt anyone's personal life but I was made to suffer a lot.  Till today there are friends of yours and mine who say, "We'd love to work with you but what to do, we can't!"  I am still dealing with that after having apologized.

But more than Salman, I'm sad about Sohail (Khan) because he was my best friend and he had even fought for me with Salman. And he had told me, 'I will sort it out, don't worry!' I felt bad that I had let a friend down. Till date, Sohail has not been able to forgive me…I speak to Arbaaz but I understand that I let down Sohail the most!

This episode is sure to send the sparks flying high with the stars coming out in the open to end the controversies. Tune into Tere Mere Beach Mein, at 9 pm, only on STAR Plus on Sunday, September 13.

crowgang 8 years ago salman needs to grow up...it because of him vivek couldnt get any film, he potrays to be a nice person ,but deep within salman is alooser, who cannot see someone being sucessful, i was a die hard salman fan , but i just hate him now

13 years ago I have to agree with parri2.. Salman made Ash. In other wrds she wouldn't be where she is today without Salman. She went to VO when he was sky high, then AB!! can't do better than the Bachans baby! One smart gurl!

ilovechocolates 13 years ago i feel bad for vivek:(
salman and his brothers have taken their revenge,now they should forget and forgive!

13 years ago i feel bad for him! but u never know whether he's saying the truth or the lie!

13 years ago vivek is a liar...he lost work after his flops Run, Kisna, and Home Delivery!! After Home Delivery Ash dumped him...everything went down after those 2 facts!! While he was riding high with Company, Sathiya, and Kaal...he had ash...after his series of flops he lost his career and his girl! Salman and Farah go waaaaaaaaaaay back and she said Salman had never asked her not to work with him!! He disrespected a senior and got what was coming to him!! Should Salman forgive him? If he doesn;t want to that is his perogative...if I was in Salman's place I wouldn't forgive him either!! What a sorry excuse for a man vivek is!!

13 years ago i v started hating Ash after all dis.she is such an oppurtunist, she did not deserve AB, hate her

13 years ago awwwwwww poor Vivek . He has suffered so much how can Salman Khan even do dis I m not a fan of Salman Khan but I have always respected his kindness nd honesty but Salllu ji dis wasnt a way to treat people. Seriously yaar ye aish ke chakkar me dono phas gaye