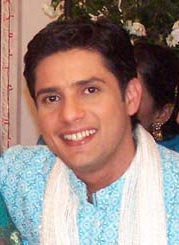 Vishal Singh, our very own Aadesh of Aathwan Vachan is very conscious when it comes to presenting himself. And no, we are not referring to his discomfort with attire, but rather his figure.

Recently while shooting for the Star Plus Diwali Special, Cadbury Celebrations Diwali Rishton Ki, he was quite pre-occupied with his appearance rather than his performance.

Every time the actor took a break, he kept throwing in suggestions and additions to his costume so that it would make him appear fit and camouflage his belly. Besides his appearance, another hindrance he faces is being a non-dancer. Realizing the predicament he was in, the choreographers decided to simplify the dance steps. But simplify it any further than that and it'll be mistaken for a football match.

Now his is definitely one weighty issue and looks like Vishal is really going to have to sweat it out!!

+ 3
14 years ago cool that good. make no diference they all do that romancing youger or older actors and actress

14 years ago what's the big deal in this!!! and the age difference is only 3 years!!! look at depika and srk's age difference!!! she's old enough to be his dauhter! seriously! there is a HUGE bias in bollywood. this thing also exists in hollywood, but its not that much!!! in bollywood once an actress reaches mid-thirties, her career is practically over!!! and look at all the 40-50 plus actors! srk, akshey, anil kapoor, sunjay dutt, etccc they are romancinf 20 plus actresses!!

+ 2
14 years ago oh well...he's an actor, not a dancer so no big deal that he wasn't comfortable dancing!

14 years ago Woah! I've just been watching old episodes of Dekh Bhai Dekh and was wondering where some of these actors were now! So it's Aadesh from Sanju ... good for him.

As for the weight thing - well in a way it's good that he's concious about it. Being healthy and in shape is important, so maybe this experience will motivate him to work out more and tone up. However the head-shot doesn't look too bad. Maybe he's just over-concious because everyone else has become obsessed with fitness now-adays.

Anyway...good luck to him with all future endeavors [:)] Thank you for the article... that's one down, a few more to go from the DBD list LOL