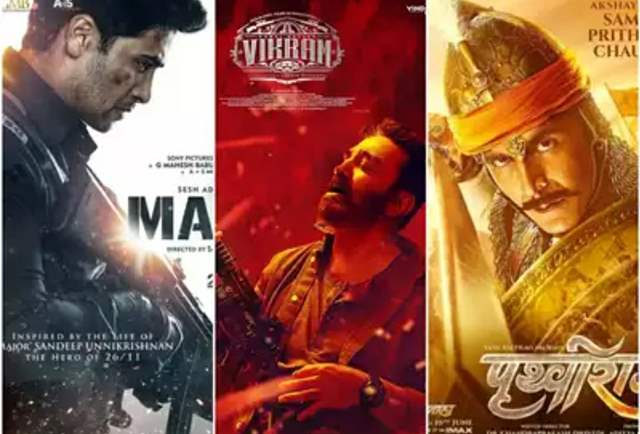 Three films released on the same day -- Friday, June 3 -- have had such different luck that it could almost be a marketing lesson for the film industry.

The Kamal Haasan-led "Vikram" crossed Rs 90 crore in its first two days -- a record also because it was a non-holiday weekend -- and "Major", starring Adivi Sesh, with Prakash Raj and Revathi playing stellar roles, notched up Rs 25.4 crore, but the much-hyped "Samrat Prithviraj", backed by two big brands (Yash Raj Films and Akshay Kumar) is struggling at Rs 23 crore.

The difference is that "Samrat Prithviraj", produced on a Rs 300-crore budget, opened on 4,590 screens with the blessings of Union Home Minister Amit Shah and UP Chief Minister Yogi Adityanath, who has made the film tax-free in his state, whereas "Vikram" is a Tamil-only film running on 3,200 screens and the David in this battle for eyeballs, "Major", made with Rs 30 crore, has been playing on only 1,460 screens. What should give Adivi Sesh a reason to celebrate is that word of mouth seems to be working for "Major" and it is showing in the 50 per cent rise in footfalls on the second day in what the trade describes as the 'Hindi territory'.

Clearly, a contemporary hero, the Mumbai terror attacks martyr, Major Sandeep Unnikrishnan, even if he's played by an actor barely known outside the two Telugu-speaking states, has more drawing power than a medieval king who takes on an invader, and no matter how brave he may have been.

Critics have also pointed out that unlike "Vikram", where Kamal Haasan, Vijay Sethupathi and Fahad Fasil have delivered some power-packed performances, Adivi Sesh, Saiee Manjrekar, and Prakash Raj and Revathi also pull off virtuoso acts, "Samrat Prithviraj" depends entirely upon Akshay Kumar. And he has not been able to do either a Ranveer Singh (as in "Bajirao Mastani"), or an Ajay Devgn (as in "Tanhaji: The Unsung Warrior").

2 months ago "Medieval king who takes on an invader" LOL so these Indian writers don't know history. India, Bangladesh, Pakistan and Afghanistan were one nation back then. So Ghori is clearly not an invader. Stupid Indians don't even know their own history. The fight was between the rulers of two empires within the same nation. So glad Prithviraj is failing miserably. I guess people are finally becoming aware of the propaganda behind this garbage film. So glad this gutka king bala maharaj is being exposed for his hypocrisy. Distortion of history and poor acting are the reason for the movie's failure.

+ 14
2 months ago Another flop in Akshay Kumar’s kitty! He’d concentrate more on quality of the movie rather than quantity.