Jay Bhanushali who started his career playing the lover boy Neev in Balaji Telefilms' Kayamath has come a long way today, and has established himself as a good actor, dancer and host. After getting involved as the host of Zee TV's popular show Dance India Dance for two seasons, Jay is back to fiction with Star One's #1 show, Geet Hui Sabse Parayi. 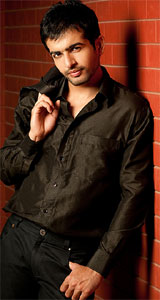 Here is Jay in a sweet talk with TellyBuzz where he talks about his journey in television, his present role, growth as an actor, on his personal life and much more..

How did you get into acting?
It is a long story actually, in my family my father has set this rule that as soon as we passed out from school we should earn some money for ourselves. Therefore after my 10th exams I started looking for work but could not get a job. My friends suggested me that I should start doing modeling; I had zero knowledge about it. I started giving auditions but it took me few months to get my first commercial. Initially I was paid good amount. Eventually I got offers from big brands. Ekta Kapoor saw me in one of such advertisements and called me for an audition. I was selected to play Neev in Kayamath.

Did you take any formal training in acting?
I do not believe in formal training and do not even understand this formula. Acting is a learning process and you should keep learning everyday with actual experiences. You learn things in due course of time. Enrolling yourself in acting institute is simply a waste of time and money according to me. I think you need to pick up good things from everyone around you.

Are you still in touch with your Kayamath cast? If yes then mention names..
Yes I am in touch with Panchi Bohra, Sanjeeda Sheikh and Shabbir Ahluwalia. It was a best team to start with and we all keep chatting with each other whenever we have time. I just finished one show with Shabbir. Meethi Chhoorii No. 1 and it is always fun to work with him.

Did you miss acting in these 3 years? Why did you take so long to return to a daily soap?
Yes I missed it a lot. I love doing romantic roles and I was enjoying it a lot. But there was this phase in television where I was offered only village based shows. I think my personality is not suitable for such characters. I always prefer doing roles to which I can relate. If my heart is convinced about it then I do it. I was waiting for such an opportunity. In Geet I can play myself and I feel that I do not have to act for such role, as it is completely me.

Do you think that you did not get the deserved appreciation for your anchoring?
No I think people loved my work and I am happy about it.

What qualities are necessary to be a host according to you?
Spontaneity, alertness, you need to have that quality of giving commands; you need to connect with audience. Gone are the days when hosts would say namaskar and talk to everyone in formal language. I believe you have to be casual with everyone and that is when people think that he or she is like us.

Are you only interested in doing cameos?
Not exactly, in Geet I accepted this role because it was good and different. Endemol people gave me a brief about this character and informed me that it is a cameo .When I started shooting for it I realized that it is much more like Neev from Kayamath and  I am liking  it. But this does not mean that I will not accept a regular long running character. I am open for it.

What do you think about the current scenario of TV industry?
Viewers have become smart, earlier it was very easy to convince them, and nowadays it is tough to do so. They know the reality and you can't fool around with them.  For example few years back people would believe in concepts of superman etc, now it is impossible for them to believe in it.

What is it that interested you to take up Geet?
It is a youth based show, youngsters watch it regularly. It is the number one show on that channel; further the role is also nice so what more could I have asked for.

Were you apprehensive about stepping into an already popular show like Geet?
I was not apprehensive about it; in fact I was pretty excited about it. I can relate to this character easily.  Though, after three years I was bit nervous to face the camera for the first few seconds.

What kind of responses are you getting for your role of Yash?
I have been getting good response so far; they love my character and have told me that it reminded them of Kayamath days. I hope will able to recreate that magic on screen somehow.

You recently got engaged to Mahhi Vij and still you don't talk about her to media. What is the reason?
It is my personal life and I like to keep it that way. I did not hide that I am engaged with her and I am very much open about it. However what irritates me most is that people start asking me rubbish questions like where we met each other and did I bend on my knees to propose her. Once I went for some charity event and one reporter asked me to play a game which was about Mahhi. It was really embarrassing for me. I think instead of
answering such questions I would love to keep my personal life private.

When do you intend to get married?
It will take some time, Mahhi is busy in her work so am I. We have not decided any date. Everyone got to know when we got engaged and when we decide to get married, we will surely announce it.

What are your interests other than acting?
Cricket, all my friends have formed this team called Boxy Boys and I keep playing matches for them. I go for practice and we play matches mostly on weekends for a cause, with known personalities and so on.

What are your future plans?
You are sounding like my mother now; I believe in taking life as it comes and go with the flow. I do not like to take unnecessary pressure by thinking about what will happen
tomorrow.

cutei 8 years ago Luv u neev and prachi
miss u a lot:-)

maaniqra 9 years ago SALAM, salman u r my jaan and 9 day 22 hours pehlay i wish you many many happy returnes of the day.love you so much.... salman i am big fan of you salman.AIMA FROM PAKISTAN

sumaiya-kay 9 years ago Why are the cvs doing away with his character!!....want to see more of him in th show..his track has a lot of potential!!

fannycool 9 years ago good answers.luv as jay,u r doing a suberb job keep it up

i5hy 9 years ago thanx for the article... good to see him back in fiction :-)

'Kullfi Kumar' Fame Myra Singh To Make an Entry in 'Maddam ...
50 minutes ago