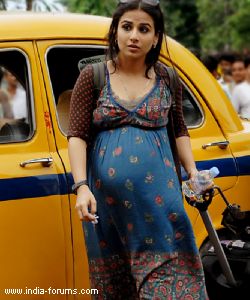 Vidya Balan is all set to promote her upcoming Bollywood flick, Kahaani, on a daily soap these days. She was last seen  on Uttaran and we now hear that Vidya Balan has shot for Zee TV's Hitler Didi.

According to our source, "Vidya Balan was on the sets  of  Hitler Didi to promote her movie Kahaani.  She has shot with Indira (Rati Pandey) and Rishi (Sumit Vats) where, Vidya will play the character of a pregnant woman is in search of her husband."

We contacted Sumit Vats who confirmed the news, " Yes, we shot with Vidya yesterday. I can't divulge the details about the track but all I can say is that it was great working with her. I am no one to comment on her but she is a fantastic actor."

Vidya Balan's episode will soon be on air..

BRADSHAW 8 years ago sumit vats is a great actor. He is awsm as RK.

8 years ago rati you are a top class actress. keep shining.

8 years ago Love you SV & RP!! you guys areamazing as Inshi, my fav telly couple ever!! Inshi forever!

Triyanijain 8 years ago angel Rati. ... love u as indira
I sincerely wish you happiness, cheerfulness and success