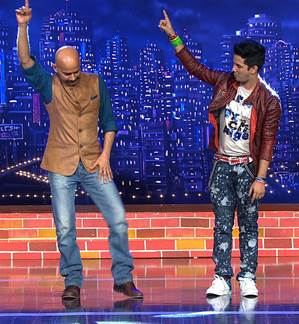 Having directed some of the most sought after names in the industry and having delivered one of the biggest hits of all times, Dhoom 3 director Vijay Krishna Acharya aka Victor, is currently enjoying his sting as a judge on Zee TV's Cera presents India's Best Cinestars Ki Khoj powered by 'Glam Up'.

Victor, being the kind of person he is, had always stayed away from any form of song and dance routine personally. On recently catching up with the country's youngest and most talented choreographer - Mudassar Khan, Victor expressed how his two left feet always keep him away from all the dancing.

On hearing how self-consciousness always held the director back from dancing, Mudassar jumped up to his feet saying how he had always wanted a chance to make Victor dance. On having an opportunity at hand, Mudassar ensured that Victor danced to his tunes. While Victor was initially a little awkward, he soon got into the groove of things and was seen enjoying his time dancing on stage with Mudassar.

Making a special appearance on this weekend's episode as a Bollywood buddy, Mudassar trained all the contestants of India's Best Cinestars Ki Khoj on their body language and basics of dancing. Talking about the time he spent with the judges and the contestants on the show, Mudassar said, "It was great to come and be a part of the show, especially to be working with fresh talent. The judges Victor sir and Sonali ma'am are both fun as well as strict when they need to be. I am glad I had the opportunity to make Victor Sir dance, as making him dance was a dream come true for me. I hope apart from training the contestants here, I soon get to work with them on their debut movie."