After the fight against the Buas Jhumki and Tumki, Rani and Yudhister in Star Plus' Raja Ki Aayegi Baraat face their next hurdle in the form a village belle, Imli who will soon be entering the palace. 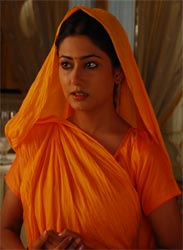 Imli portrayed by Via Choudhary saves Yudi (Kapil Nirmal) and Rani (Anjali Abrol) when they fall into the river, and this is how the girl makes her entry in their lives.

Via who has done lot of modeling assignments in Pune is presently seen in NDTV Imagine's Jyoti where she plays the character of Panchi.

We talked to the actress who describes her role. "Imli is a very timid, scared and innocent girl who cries when someone scolds her, and at the next moment will laugh when a joke is cracked. She saves Yudi and Rani and they bring her to the Raj Mahal. But there is a mystery related to her entry".

Giving more details is our source, "Imli is a simple village girl who is an orphan, and her character initially will be similar to Tabu's in the movie Viraasat. The girl has come into the Raj Mahal with an intention in mind, and will turn out to be a vamp later on. But the high point cannot be revealed now".

Well, looks like the mystery element in the show will never come to an end…

TSharan 11 years ago the worst entry in the show.....it has totally spoilt the show....but i hope not beyond repair....

PureBliss 11 years ago oh god again a similar track? goodies turning into baddies can we have some innovative ideas please?

shivkundan 11 years ago Creatives are running out of idea. Such a wounderful cast deserve something good

bobbiedhillon 11 years ago Please don't ruin Yudi's character any further and show him interested in someone else. That is not what we want to see.

bobbiedhillon 11 years ago The article said that she will become prominent member of Raj Parivaar. I think the possession of shahi ring means you are a queen or a king. God I hope not.....

shivkundan 11 years ago Creatives are goen creazy. This show is blessed with such a wounderful lead pair, and so tanented actors but creatives are not using them properly. Don't know what they are going to show now but be sensible for us.

Thanks TB for sharing for this news.