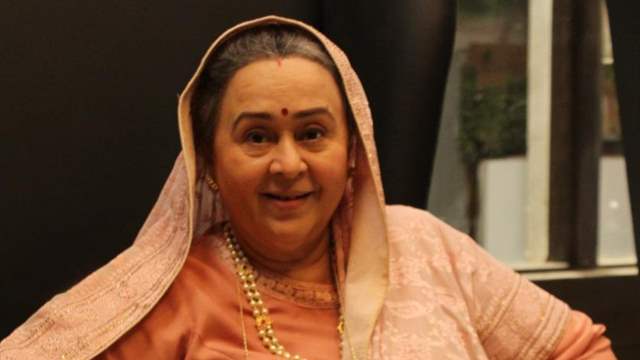 Known for the roles that adorn her career, Farida Dadi is an industry veteran is now seen in Sony Entertainment Television family drama, 'Appnapan... Badalte Rishton Ka Bandhan'. The actress who has many memorable characters under her belt is starring in the drama as Kinnu Ma, Nikhil’s (Cezanne Khan) mother and Pallavi’s (Rajshree Thakur) mother in law. Shedding light on the dilemma and complexities in relationships, the show revolves around an estranged couple who are dealing with their own set of challenges in life owing to their past. In the on-going track, the Kiran maa’s entry (Farida dadi) has brought Pallavi, Nikhil and the kids together under one roof making the drama more interesting. As Nikhil and Pallavi pretend to be a real couple for the sake of their mother, they have started understanding each other better but yet their past still haunts them, which continues to keep them apart. In the upcoming track, the couple will be seen renewing their vows on Kiran maa’s request; making it a grand celebration for the entire family. Adding further obstacles in Nikhil and Pallavi’s life will be Pallavi’s cousin sister, Sonali who had been the catalyst of breaking apart the happy couple in the first place.

Talking about her character in the show, Farida Dadi spilled some beans about joining the 'Appnapan' cast and truly feeling 'appnapan' from the cast.

1. Tell us something about your character?

Connecting with Balaji and connecting with Ekta Kapoor is like coming back home, they have always given me good roles and this time also she has given me a character to work with and to think about rather than just playing a role. She has chosen me as Nikhil's mother, a character who feels real because of her personality and her emotions. Kinnu ma is a person you may have known in your real life as well because she has been written like someone who is inspired by real life. This is actually her status quo, Ekta can look at a person and know what character they are sure to perfect. Kinnu Ma is the kind of person who scolds her son when required and who loves her grandchildren and loves to be with them. She is a woman who mirrors many mothers turned grandmothers in real life.

2. Do you find your character mirroring you in real life or are there differences?

There are differences, but a lot of similarities as well. I am a lot stricter with my son but I do love my family a lot. For me, they are my world and all my decisions are somehow connected to my family. I find my loyalties divided between work and family and Kinnu Ma finds herself between two worlds as well. She is a woman of integrity, as am I and when she loves, she loves with her whole being, without the fear of not being loved back. In many of her beliefs, I too find myself siding with her. I love that she is such a cool mother-in-law to Pallavi and takes her side so often. A good mother knows how to treat her son and his better half equally, both as her children.

3. Balaji Telefilms has been quite a part of your career graph. Does Appnapan then feel like a homecoming to you?

Balaji has always chosen good roles for me and being a part of Appnapan is actually like a homecoming. I just did another show with the production house and then Ekta thought of me for this role. When they called me I did not feel the need to ask about my character, because I know Ekta will choose the best for me.

4. Being an industry expert and having worked in many films and shows, you have had your share of subjects that the entertainment industry has wanted to talk about. Seldom have topics like children dealing with the separation of parents come up in shows and films. What is your take on the current audience's adaptability to subjects like this being nationally televised?

I have been in this industry for a long time. In 1959 I started my career as a child artist, then I took a break of 30 years, so I have seen the industry change. The industry mostly shies away from topics that would probably make the audience uncomfortable because there is no money in it. As an industry, we work to serve the interests of our audience. When I was young in the industry, when we tried to make films and shows on topics that were out of the box, we were deemed to be "arthouse" and so were only able to target a particular audience. Commercially I think, now the industry is seeing quite the change. We as an industry are changing only because the audience is changing. Their tastes are becoming much more refined, much more worldly because they are being exposed to so much cinema, within and outside our borders. This is opening horizons for us, much that is unexplored. So, I feel that the audience is more than capable of handling and watching shows that challenge their perception of something like a "happily ever after". This show has come up with an amazing message, it is trying to nail its messaging with not only a good storyline but also with the help of good character sketches. The show talks about complexities of relationships and believes that it takes work to create the "one big happy family" idea that Indians so duly treasure. The pov that children suffer after their parent's separation has been explored in many domains but not like this. Here the show depicts how parents and children are suffering in tandem but having different experiences of the pain. Exploring that, has been one of the high points of the show.

5. Tell us about your camaraderie with your costars, especially Rajshree with whom you have worked before?

I have had some of the most amazing costars to work with in this show. I have previously worked with Rajshree in another show and she had been a delight then and so now as well. She is a lovely person and we share conversations often and know each other quite well. Even Cezanne Khan is so respectful and loves me so much both on and off-screen. We share quite the mother-son bond because he takes care of me and asks after me just like my son does. All of them love and respect me so much. It’s not only the costars, the entire team, everyone on set is so good and full of love and respect. This is one of the good things about working in Balaji and Sony TV.

1 months ago Thanks for sharing

1 months ago NikVi and Dadi look so real on-screen 🤗

1 months ago Awesome , dadi is indeed a delight to watch