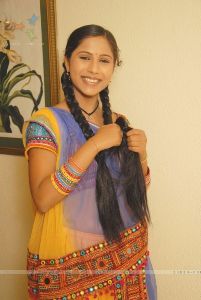 Tellybuzz had earlier reported about Vibha Anand aka Laxmi of Zee TV's Sanskaar Laxmi being admitted in the hospital after a sudden health break down.

Further informing, a source says, "Though Veebha was admitted in the hospital for a day, there have been no signs of improvement in her health. Therefore the doctors had decided to keep her under observation so that she could get her blood tests done. The results say that Veebha has been diagnosed with Dengue. She was kept under medication for almost two days."

"But after the two days of treatment there was no betterment in her condition and accordingly her parents shifted her to another hospital to get a better treatment", source adds.

Talking about the shoot of the show an informer says, "As Veebha is really in a very bad condition to work the Production house has decided to concentrate on a different track. The unit cannot afford to halt the shoot as there is not enough bank of episodes."

We contacted Veebha and she managed to speak, "Hope I get well soon as I can't take injections anymore. My hands are swollen as of now. And i am regretting for ignoring my illness since long."

tofeeees 9 years ago ohhh gosh hope she gets well soon :( feeling terribly bad for her :(

-Nirvana- 9 years ago Awww,I hate Dengue! It gives you the worst feeling ever.Poor Vibha,hope you get well and recover soon dear.And the creatives will come up with some new track until you come back.

nuttycleo 9 years ago hmm...different track when the show ends in next 3-4 weeks??Get well soon Veebha...wud def want to see u more b4 the end!!

cookie09 11 years ago oh so sad .. she was such an elegant and graceful woman. may her soul rest in peace