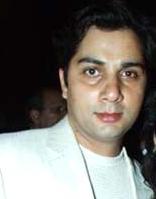 Known for his different roles and heart felt portrayals, this handsome actor will now be seen in the role of an NRI from America in Ajay Sinha's "Ghar Ek Sapna'. The actor was the lead in Ajay Sinha's last directorial venture, Astitva Ek Prem Kahani, which was comparatively one of the best serials to come of the television kitty in recent times.
So what prompted him to do a cameo in Ghar Ek Sapna? "My financial state", pat comes the reply from the quick witted actor. " The character is good, it's that of an NRI who is trying to woo one of the ladies," Varun further explains.
So does this mean Chabi Hai pados Mein, in which he plays the main lead, might take a back seat? " No, not at all ! I am required to do a maximum of 5 to 6 days of shoot a month, so Chabi will not suffer at all," he replies firmly.

Any chances of the character turning negative? " Possibly, but to be honest, I don't know at this point. In fact, after the initial three four episodes, they will decide how to take this character forward. It's premature to talk about the role right now. Let teh character develop a bit, then I shall be able to talk more about it."

Ajay Sinha's serials are kind of repititive, with the hero always being a pendulum between two females in his life. " True, but the narrative is definitely better," Varun reflects.
We definitely hope to see much more of this versatile actor and wish him all the best for the role.

Infinitedreams 11 years ago Varun is wonderful actor, and i am so surprised that he doesnt have big fan following.

adoremevirgo 13 years ago Varun is an excellent actor. one of the best in indian television.
I wish him all the best.