An actor in 'Khoya Khoya Chand', industrialist in 'Corporate', music producer in 'Bheja Fry' and now a journalist in 'Via Darjeeling', actor-director Rajat Kapoor says he enjoys playing different roles in his films.

'That is what one tries to do all the time - be different - isn't it? In my forthcoming films, you would see me playing very different roles,' Rajat told IANS over phone from Mumbai.

After doing a variety of roles, Rajat wants to do a project based on horror or science fiction, though he clarified that he is open to do 'everything'. 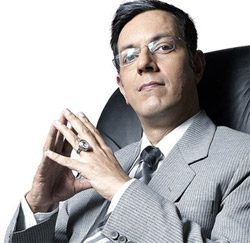 Rajat started his career as a director with 'Tarana' and earned critical acclaim for 'Raghu Romeo', 'Mixed Doubles' and 'Mithya'.

He forayed into big-time acting with the blockbuster 'Dil Chahta Hai' as Preity Zinta's uncle and was largely appreciated in 'Corporate', 'Bheja Fry' and 'Khoya Khoya Chand' for his performance.

His 'Via Darjeeling' is hitting Indian theatres June 27.

'People are calling it a thriller. But the plot of the film is such that a group of friends are sitting at my house and speculating over a thing. It's not a psychological thriller,' Rajat explained.

In 'Via Darjeeling', Kapoor has been paired opposite TV actress Simone Singh, who was also seen in films like 'Kal Ho Naa Ho' and 'Delhii Heights'.

'She's very beautiful,' is all Rajat had to say about his co-actor.

His other forthcoming releases include 'I am 24', 'Halla', 'Tere Sang' and 'Raat Gayi Baat Gayi'.

Recent media reports said that Rajat had started hitting the gym to look fit for a certain towel-dropping scene for his film 'Raat Gayi Baat Gayi', but he denies it completely.

'It's all rubbish. Firstly, there is no such scene,' he clarified. But he does agree that a good preparation is required for every actor to perform a character well.

Rajat, who also hosts a TV chat show 'Lounge', says that even though he has been acting and hosting, his heart lies in direction.

'Direction is what I have learnt professionally and would always want to do. Acting is something I like doing and hosting is just a small part of me,' he quipped.