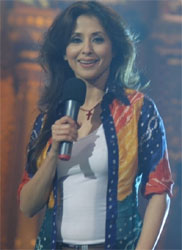 The otherwise Ms. Perfect Urmila Matondkar, host of Sony's Waar Parriwar will be seen in a different avtaar altogether. Dressed in torn jeans and colorful shirt with a tapori lingo, the beautiful aamchi mulgi shocked everyone on the sets. Even the three judges were inspired by her tapori lingo where she addressed them ‘Bhailog’… While Jatin Pandit and Kumar Sanu did a fare job with the lingo, Udit Narayan for some reason was speaking in Bhojpuri!!

Since the episode's theme was based on tapori all the contestants sang songs inspired by the theme. As Jatin and Kumar Sanu commented on performances, Udit's Bhojpuri was a tad difficult to understand! Well whatever Udit was thinking … sure was not recognized by the contestants!!

Watch Waar Parriwar On Tuesday, July 22 At 8.00 p.m. Only on Sony Entertainment Television..

dasvinder singh 14 years ago hi in Chandighar never heard of

+ 2
14 years ago Thanks. Wow with the new tapori look and song did she also lose her ZZZ and Chh vocabulary too???? LOLZ