'The 'Unforgettable' tour gave me an opportunity to perform with Amitabh Bachchan, Aishwarya Rai and Abhishek on the same stage,' Madhuri said in a statement released by the Wizcraft International Entertainment, the organisers of the event. 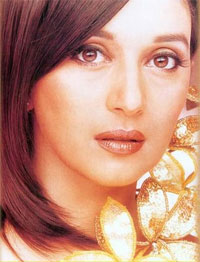 'Los Angeles and San Francisco shows have been overwhelming and I am looking forward to visiting other cities and reaching out to my fans. I have worked with Aishwarya and Preity before and that has been great. Also, there is a great comfort level in our team and this has been an unforgettable experience,' she added.

Madhuri, who lives in the US with her husband Sriram Nene and two sons, agreed to be a part of the Bachchan tour for the shows in America. The first lap of the tour will end Aug 16.

She became an overnight star with her performance as Mohini in 'Tezaab'. People instantly used to associate her with the name and the popular song 'Ek, do, teen'.

'I was mobbed for the first time after my movie 'Tezaab'. I was at the Mumbai airport when few youngsters were whispering amongst themselves and I caught the word Mohini. One of them asked, 'you are Mohini from the film 'Tezaab', right?' I was very excited when I heard that,' she maintained.

Madhuri's first ever world tour was with Anil Kapoor in 1991 after 'Tezaab' and 'Ram Lakhan'. Both were huge hits.

The actress has given great performances in films like 'Khalnayak', 'Tezaab', 'Dil', 'Dil Toh Paagal Hai', 'Devdas' and more recently 'Aaja Nachle' and her talent in the traditional dance form is visible through the graceful moves and effortless expressions that she gives in her dance sequences in the films.