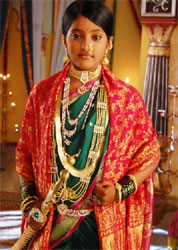 The child artiste Ulka Gupta, who plays the title role in Zee TV's Jhansi Ki Rani, has been blushing pink on the sets of the show.

The current track of the show features her character, Mannu, getting married to Gangadhar Rao, the King of Jhansi. Given that little Ulka is just about 12 and quite a tom boy, the demure act of a bride had her constantly squealing with laughter.

According to our source, "Each time Ulka had to perform a traditional shaadi ritual, she'd cover her face amidst giggles and run to a corner to hide herself right in the middle of each shot. Very evidently, the whole idea of portraying a marriage to a man twice her age was extremely embarrassing for this pre-teen. Moreover, her bridegroom -  King Gangadhar of Jhansi (played by actor Samir Dharmadhikari)happens to be quite a hit with her class mates. Apparently, the girls have even suggested that Ulka marries him in real!".

And this is not the end of little Ulka's bridal woes ... she is reportedly quite upset that she is no longer going to shoot with the cast members that she has grown fond of in Bithur, as her character Mannu must now be shown starting life afresh in Jhansi post-marriage- with a completely new set of actors to act alongside.

So just like most Indian brides shed copious tears at the thought of separation from their maayka and worry about getting along fine with their sasural-wallahs, little Ulka is going to miss her older set of co-actors and is a little wary of befriending the new lot in Jhansi. Quite the dulhan, isn't she?

+ 5
12 years ago She really brought rani lakshmibai to life...

+ 8
12 years ago she's an amazing actress, and the show is one of the best

12 years ago Aww...she's brilliant...I would so totally be embarrassed if I were in her place too...