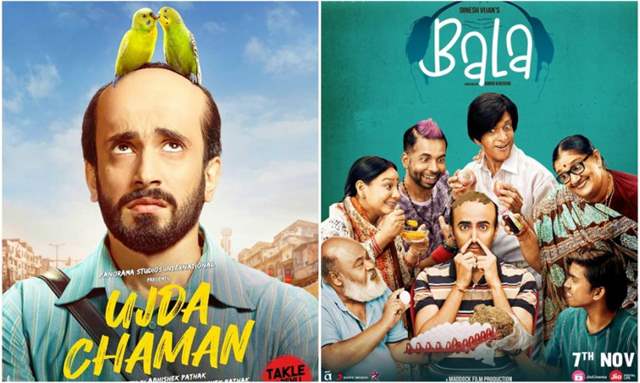 Ever since the release of the first look, teaser and trailer of Bala and Ujda Chaman, the makers of both the movies have been engaged in a cold war, as not only do both the movie revolve around premature balding of men but are also set to release just one day apart.

While the Ayushmann Khurrana starrer is set to release on 7th November, the Sunny Singh starrer will release on the 8th. Earlier Bala was scheduled to hit the screens on 15 November, but the release date was changed due to various reasons.

Days after, the producer of Ujda Chaman, Kumar Mangat, told SpotBoyE, “It is extremely unethical and wrong on Maddock films part to clash with our film. We always were coming on Nov 8. But what can we do now? Let them come. I am sure my film is good.”

Now a report from SpotBoyE states that Mangat is all set to drag the makers of Bala to High Court as he wants to stall the latter’s release. Even the director of Ujda Chaman, Abhishek Pathak, had stated that he will file a case of copyright violation, against the makers of Bala which also stars Yami Gautam and Bhumi Pednekar in pivotal roles.

Talking to SpotBoyE in an exclusive interview, Mangat revealed that he will be heading to the court. He said, “Yes, main kal Court ja raha hoon (I am going to court tomorrow). They should not have brought their film on the same date as mine.”

Ujda Chaman is an official remake of Kannada film Ondu Motteya Kathe. Even the National Award-winning filmmaker Praveen Morchhale has accused the makers of Ayushmann’s Bala of copyright violation.

With so many accusations levelled against Dinesh Vijan, producer of Bala, only time will tell if the movie will have a smooth release on 7th November or not.

In a recent interview with Press Trust of India (PTI), Sunny Singh also opened up about the clash as well as his liking towards Ayushmann Khurrana as an actor. The 34-year-old actor said,

I am away from all of this. I am doing a film, I am also getting to know that this film (Bala) is kind of similar. Initially, you feel like ‘why and how is this happening?’ but then you feel it’s ok. He’s playing his part, I am playing mine. We both are actors doing our jobs. I love him and I’m a fan of his acting. I know Aparshakti (Khurrana) and Tahira (Kashyap) too, so it’s all cool. People might also feel that way (comparisons) because it’s trending but personally, an actor is chilling and thinking only about his movie. Even if they compare, the makers know both have put in their best. Which film works at the box office is another thing. I am only concerned about respect from the audience and makers. Comparisons with him won’t bother me. I liked the trailer because I was only looking at Ayushmann. He is super good and does it nicely. People have a different way of doing it. I saw the similarity but that’s not my call. I haven’t directed it, I am not the maker. I didn’t have an idea that what I am doing will be like that. We just did our work.