View Profile
How awkward can a situation be made when it comes to love? Our creatives seem to know the answer to it as they make two brothers fall for the same girl in Sony and Balaji Telefilms' Pyaar Ka Bandhan. 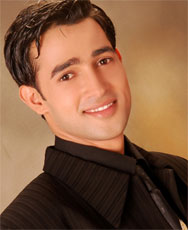 Featured Video
According to our source, "Milind (Mahesh Shetty) is all up with hopes to marry Devika(Gitanjali). However he has hidden agendas behind this marriage. He wants to marry Devika because the girl's father is a well-off politician and he wants to make his place in the field of politics too. Devika, it seems is aware of this matter but is not bothered by it as the boy has been approved by her father."

However, things are soon to change. "Devika already has positive thoughts about Aziz (Karan Sharma). She is always supporting him whenever Araina (Lavanya Tripathi) criticizes him. However, due to certain circumstances this soft corner develops into love and she genuinely has second thoughts about marrying Milind."

"This change in Devika's attitude will affect everyone especially Milind for obvious reasons. Milind who was initially wary of Aziz later begins to trust him when he donates blood to Prateeksha (Kritika Kamra). However, once Milind becomes aware of Devika's feelings his enmity for Aziz is going to be worse than before."

Karan Sharma aka Aziz tells us, "Yes, by the end of this month, a love track will start between my character and Gitanjali's character – Devika. But how it will happen, I cannot tell you. Catch the show to see the change in circumstances!"

The love triangle will not only focus on the weirdness when two siblings fall for the same girl but also the tensions that arise when it comes to inter-religious love saga.

12 years ago milind and devika look horrible together,,,milind can looks good only widd radha... devika looks good with Aziz...both are very soft spoken and bechare whereas milind and radha are like fire together....

+ 2
12 years ago sounds interesting..karan is really cute, but devika and milind make a nice couple in pkb

+ 6
12 years ago thats sad
we already have a triangle now another one?

12 years ago Thanks Ekta 4 doing this ...Thanks a tons for giving us something different rather than just a boring love tracks of prasha and Arnak...Looking forward to see it now...

12 years ago thanks a ton Ekta for giving us relief by not uniting prateeksha and shashank ..in pkb ...Plzz cut short Kritika character from PKB and launch a new show of karan kritika as main lead..As kritika is also playing sidey charadter in PKB .......plzz mam consider this as a suggestion ...Its a request

12 years ago When PraSha are so hot and happening in the show, why are they introducing a new track? I mean, good for Milind Devika and Aziz, but there are so many fans dying for PraSha!!!