Drama does not seem to end in Kaun Jeetega Bollywood ka Ticket as amidst all the chaos, news pours in that Twinkle Bajpai who has been nicknamed as ‘Nautanki’ by few other contestants there has staged a walkout from the show along with her partner Puneet Israni!! 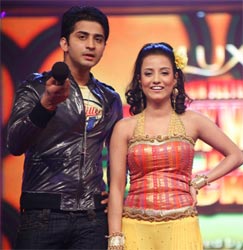 Featured Video
Telly Buzz got a fuming Twinkle on phone who says, “I was about to leave the show in the 2nd episode when there was a big fight between Chetan and my partner Puneet, but I decided to stay back. Ever since the show started, I have been against the concept of contestants voting out a jodi and I am damn sure that if I would have been in the bottom three, I would have got eliminated as all present here dislike Puneet from the first episode”. Adding on, the actress says, “Eyebrows were raised by many, especially Mihika when we got 30 points in the first episode. Chetan being the eldest in this group should have handled the situation with Puneet in a better way; instead he went to top gear!”

Twinkle who was in the top three last week was shocked to know that she was in bottom three this time around, and this is when all hell broke loose, says our source. “When I saw myself in bottom three, I really got annoyed and decided to walk out of the show”, confirms Twinkle.

According to Twinkle, when she took this decision it was Mihika who voiced first that she is walking out as she is staring at defeat. “Mihika started the issue and later even Chetan and Karan followed suit and starting talking ill of me”, cribs Twinkle.

However, when we asked Mihika, she spoke out, “If Twinkle was unhappy with the voting pattern, she should have voiced it from the very first episode. She did not even think twice before eliminating a good contestant like Panchi. Now when she was in the bottom three, she got a fear that majority will vote against her”.

Karan Patel, who also voiced his thoughts about Twinkle in the episode, says to us, “Twinkle lacks sportsman spirit. She cannot handle all this, so she staged a walkout”.

Mihika goes on to say, “Twinkle has a bad mouth, and went on to say rubbish about each and everyone. She showed her class by opening her mouth and I stayed calm and maintained my dignity”. When we quizzed Twinkle further, she maintained, “I am from a good family and so is Puneet. We do not deserve to take all the nonsense that others speak here. So we decided to quit”.

The battle of words does not end here as Mihika quips, “She should have quit after getting 30, which would have been graceful. Instead, walking out after being in bottom three just shows what a person she is!! She does not have the guts to face the challenge”.

Well, is this a case of ‘Sour Grapes’ for Twinkle??? Let us wait and watch to know more on it!!

+ 2
8 years ago She is one uber wannabe with no self respect and only ego..

+ 3
14 years ago Twinkle correctly said all of them there are nautankis.. No sportman attitude.. Keep pointing fingers at each other instead of competing.. Who watches this crap.. May god bless them..ha ha ha.. Remaining ones are bigger nautankis..

14 years ago wat can i say..she had this coming her way...i hope this will b the end of her nautanki...

14 years ago why participate in the show if u can't handle it :S

+ 3
14 years ago Talk about no sportsmanship.. I think what mihika was saying was right, if she didn't like the concept in the beginning why didn't she quit when she was getting a 30 and not when she was at the bottom 3...