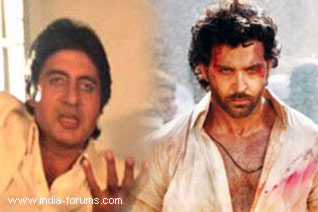 Vijay Dinanath Chauhan is back! The character, made popular by megastar Amitabh Bachchan in 1990 film "Agneepath", is making a comeback on the big screen, albeit in a new avatar with Bollywood hearthrob Hrithik Roshan.

The 1990 film, directed by Mukul Anand, was produced by Karan Johar's father Yash. Though the film didn't work at the box-office, it won the best actor national award for Amitabh.

Twelve years later, Johar came up with the idea of remaking the film by setting it in the modern day scenario, with debutant Karan Malhotra taking the mammoth task of directing it.

Set in a small Indian village of Mandawa, Vijay Dinanath Chauhan (Hrithik) is taught by his principled father about the path of fire - Agneepath. However, Vijay is left completely broken after evil drug lord Kancha Cheena (Sanjay Dutt) hangs his father to death.

Following the death of his father, Vijay leaves for Mumbai with his pregnant mother, pledging to return to his native village later and bring his father's glory back.

In Mumbai, city gang lord Rauf Lala (Rishi Kapoor), takes the 12-year-old Vijay under his wings. During his journey, Vijay makes and breaks many relationships.

Vijay only finds support is his best friend Kaali, (Priyanka Chopra), who stands by him through thick and thin. Fifteen years later, his hatred for Kancha takes him back to Mandawa where his life comes a full circle. Henceforth, begins Vijay's quest to seek revenge from his father's murderer.

The role of evil Kancha Cheena was originally played by Danny Denzongpa. But this time, Sanjay has been roped in to essay the villain's part.

Karan admits remaking "Agneepath" was an emotional decision as he wanted it to be a commercial hit. The film also featurs veteran actors Zarina Wahab and Om Puri. The film is said to be releasing in over 2,000 screens and has already created a lot of buzz.

Sanjay's wicked smile, puffed-up eyes and dreadful first look has attracted appreciation from all quarters for the actor. When Hrithik signed "Agneepath", he was quite clear of not emulating Big B's portrayal of Vijay Dinanath Chauhan. He wanted to give the character his own twist.

Rishi Kapoor insisted on having a look test for his role as Rauf Lala. The 58-year-old is one of the villians in the remake of 1990's "Agneepath" and wears kohl (kajal) in his eyes, a karakul cap and kurta-pyjama to fit into the Muslim character.

Rishi admits he insisted on a look test because he wanted see how he looks in a negative character.

Of her role, Priyanka says her character is the soul of the film. She brings happiness and naughtiness in the film.

Another highlight of "Agneepath" is the item song "Chikni chameli", which features Katrina Kaif. The actress' fast, Maharashtrian dance moves have impressed one and all.

According to composer Atul Gogavale, Katrina spent eight days in rehearsal before starting to shoot the song. It took nine days to finish the shoot, and her energy levels never saw a dip.

The special screening of the film has found appreciation from film celebrities, but whether "Agneepath" will be able to break box-office records, remains to be seen. The film will release Thursday.