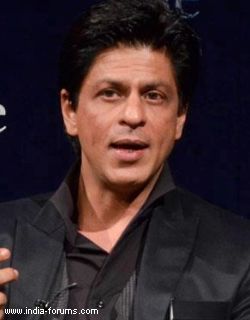 TV stars find Shah Rukh Khan an inspiration as he after all rose to stardom from TV. Here is what a few of your favourite TV stars have to say on Shah Rukh Khan's birthday…..

Shah Rukh Khan is already so successful that we can't wish him more success. I however wish him well, I hope he keeps on entertaining us so that both he and we are happy. He is out and out an inspiration for TV actors since he started off with TV. I can't think of one particular Shah Rukh Khan movie which is my favourite- I have loved Darr, Baazigar, Kuch Kuch Hota Hai, Kabhi Khushi Kabhie Gham and Chak De India. I am looking forward to watching his upcoming movie Jab Tak Hai Jaan.

I am the biggest Shah Rukh Khan fan ever. I am very excited as today his films are being shown on TV. In fact I am rushing upstairs between my shots to watch Dilwale Dulhania Le Jayenge. Since he had started his career from TV he inspires all of us TV stars to dream big. He is awesome in romantic roles. King Khan has lived his life king sized. Let him get even bigger and better.

My favourite Shah Rukh Khan movie is Chake De India. He has a vibrant personality and I wish he has a great life ahead.

I greatly respect Shah Rukh Khan. He is a great inspiration to TV actors because he has grown from TV. He has won so many awards and enjoys overseas fame. He is a great romantic hero. My favourite SRK movies are Swades, Chake De India and  Dilwale Dulhania Le Jayenge. May God bless him and his family.

Nobody can deny being Shah Rukh Khan's fan. I think he is a great actor. After starting off as a TV actor he has crossed almost each and every boundary to reach an untouchable level. Many people don't deserve to be stars but he deserves every bit of his stardom. He seems to be growing younger on his birthdays. I hope that ten birthdays later he looks like a 30 year old. My favourite Shah Rukh Khan movie is Dilwale Dulhania Le Jayenge.

Who isn't a fan of Shah Rukh Khan? He was born to be a king and has proved himself to be one. I look up to him with great respect. Though he is in his 40's he looks like a young college lad. I hope that he goes on to be an evergreen hero like Mr.Dev Anand.

I greatly respect Shah Rukh Khan as he is after all a self-made man. He had to struggle and now he is the badshah of Bollywood. I admire him a lot. Like me he hails from Delhi and came to Mumbai to make it big. He is a very down-to-earth gentleman.  My favourite Shah Rukh Khan movies are Mohabbatein, Kuch Kuch Hota Hai and Dilwale Dulhania Le Jayenge.

I admire Shah Rukh Khan. Just like him I wish to be a TV star who went on to become a superstar. Though I would like to see him on TV, I think he is really good at movies. He should be doing movies jab tak hai jaan. My message to Shah Rukh Khan is that he should keep working and I hope he has a brilliant year ahead.

I quite like Shah Rukh Khan. Despite hailing from a non-film background he has achieved so much.  I am nobody to advise him on his birthday, nevertheless I wish to advise him to continue with his good work and take good care of his health. My favourite SRK movies are Kuch Kuch Hota Hai, Dilwale Dulhania Le Jayenge and Chak De India.

7 years ago Siddharth Shukla, you have much more charm and charisma than Shah Rukh Khan...

7 years ago Siddharth Shukla love you

8 years ago Love you Shantanu Maheswari

you're the best. I am a SRK fan too

9 years ago tannu fav srk movie is CDI,its also one of my fav too

9 years ago thank you for quoting Shantanu's wish!!
it was pleasure to see my love wishing my KING

Shantanu and SRK love you both tooo much

9 years ago Wow..Siddharth Shulka also likes SRK..
I love both of them