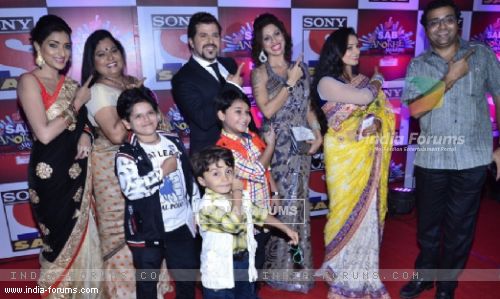 Recently at the award function of SAB Ke Anokhe Awards on SAB TV many of our telly actors were seen performing on various dance numbers. The theme for the event was larger than life carnival.

We got in touch with our source to know more on the dance performances by our telly actors.

Says our source, "The event had larger than life - Carnival as its theme and all the entrants would find jugglers at the entry to welcome them in a grand manner. Also, there were performances by various artists like Rubina Dilaik, Bakhtiyaar Irani, Sudeepa Singh, Abhishek Avasthi and many more. Debina Bonnerjee Choudhary who is seen in Chidiya Ghar had danced on Indian semi - classical. Amir Ali had also performed a power pact dance on Indian semi- classical with a mixture of modern dance style. Moreover, the viewers will also get to see Bakhtiyaar Irani dancing on a song from the film Hero Panti."

This coming together of major faces of our television industry will surely make the function merrier because  it's correctly said, more the merrier, haina?

laxmis 6 years ago Can't wait to see your act in the awards show Rubi DIlaik!

flowerrosa 6 years ago Rubi missing you on tv.plz give us your come back news.

Srigayathri 6 years ago Dear Rubina.. eagerly waiting to watch ur performance... Be happy and take care

sunshineglow 6 years ago Rubi your the most beautiful and versatile actress on tv.waiting for your areal act.