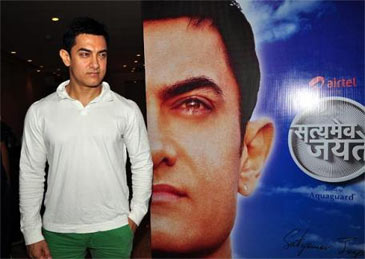 "Now television will no longer be called an idiot box, the vision of television broadens with 'Satyamev Jayate'," the 43-year-old tweeted.

Bhandarkar is currently working on his ambitious project "Heroine" starring Kareena Kapoor in the lead role.

Bollywood actor Tusshar Kapoor is back in Goa to shoot for his upcoming movie "Kyaa Superr Kool Hai Hum" (K2H2) and says that place has beocme his village.

"There is absolutely no doubt that i am a good cook . I shall venture into french cooking (my favourite) once (I am) back from shoot," tweeted the 41-year-old.

Manisha, who was last seen in national award winning film "I Am", will be seen in Ram Gopal Verma's "BHHOOo.!", a sequel to 2003 release hit horror film "Bhoot".