Is your serial facing tough competition from another serial in the prime time slot? Is there a fluctuation in the TRPs? Or do you want to catch the attention of the viewers by doing something different? Then, here is an easy way out, folks! Draw in the rich cast of an upcoming film and promote the film in your serial on a lavish scale; yes, you are guaranteed to get the highest TRP for that particular episode.. 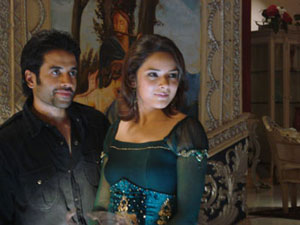 Ekta Kapoor, the Queen of Telly World, set this new trend recently by publicizing her film, Shoot Out at Lokhandwala, in her widely-watched serial Kyunki Saas Bhi Kabhi Bahu Thi. She had introduced her brother and actor of the film,Tusshar Kapoor along with Shabbir Ahluwalia and others in the star cast, to the main storyline of Kyunki. Now, Ekta is back again, promoting the Siddhi Vinayak Banner film Aggar, which stars her sibling, Tusshar Kapoor, Udita Goswami and Shreyas Talpade, and this time the serial that gets all attention is Kasturi. 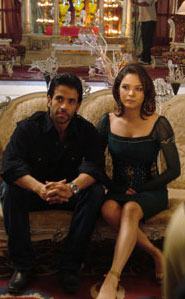 Aggar is a story of electrifying passion, betrayal and terror. It is the story of an obsessed lover Aryan(Tusshar Kapoor) who is madly in love with the married Janvi, played by Udita Goswami. Shreyas Talpade plays Dr. Adi , Janvi’s husband in the movie.

Udita Goswami says, “I am completely bowled over, seeing the sets of a television show. I mean, seriously, the perfection, the details are simply amazing. I have honestly never worked in such a set before. The shooting process is somewhat the same. However, its a little more eased out. The Kasturi team is simply rocking; I am simply having a Blast working here... This is the first time I’ve done a television show, and it feels great... In the movie Aggar, i play a girl who owns an event management company where Tusshar works, some what similar to Kasturi I guess.” 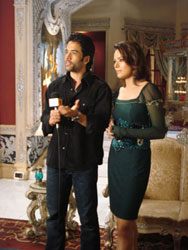 Tusshar quotes, “The reason we chose Kasturi for our movie, is because the story line of Kasturi is the same as our movie. I have come to this particular set before, but its been years, since I shot here. After the successful episode of Shoot Out At Lokhandwala in Kyunki, we decided to opt for Kasturi this time. My character is some what the same as what Karan plays in the show, but my character is more of a physcho than what Karan here is. There I am shown working in an Event Management company and mine is a very real to life character.”

So get ready for another rocking episode of Kasturi, where Bolly and Telly World will share the same screen, yet again! Last but not the least, go catch up with the movie Aggar that is releasing world wide on 14th September..

14 years ago Is your serial facing tough competition from another serial in the prime time slot?

Well honestly maybe if they moved kasturi to a time slot where ppl are actually awake to watch it.
I kno that cuz i have to wake up @ 6am i'm not staying up untill 11 to watch the show.

14 years ago thanks... that interesting, I wonder how they'll incorporate them into the show!