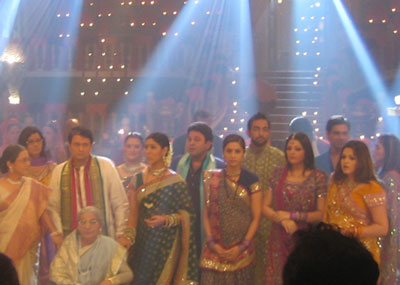 
After helping KT find her rapist, Parvati makes a come back in the show, when Mihir (Ronit Roy) is freed from allegations that proved that he was Tripti’s murderer. As the Virani family rejoices for Mihir’s home coming, the Agrawal family joins them in celebrating the victory. What connects Parvati and Tulsi this time is the Ganesh Idol that Tulsi wishes to get for her husband that belongs to Parvati.  Parvati brings in her family for the celebrations and this is an episode which will even host a fabulous dance sequence, with the two larger than life characters, Tulsi and Parvati dancing together. Catch the two families dance and celebrate on the title track of – Kabhie Khushi Kabhie Ghum.

but yeah kinda would have been better w/ smirti, all well :)

14 years ago Thanks so much for this....seems to be one gr8 episode! Can't wait for it to be aired