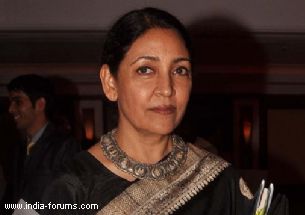 Veteran actress Deepti Naval, an avid trekker, says that at one point in her life, she just wanted to explore exotic global destinations. But later she realised that her priority was to travel to the nooks and corners of her own country.

"For a few years, I felt I've to see places like Greece and other foreign locales, but then later I realised that I wanted to see India thoroughly," the 56-year-old shared during a session on Bollywood and Tourism at the Confederation of Indian Industry (CII) Tourism Summit here Friday.

The Amritsar-born actress was a student in New York when it dawned upon her to travel all the way to Mumbai to become an actress. This was driven by a desire to shoot in the picturesque Kashmir.

Hills and mountains, she said, were an important part of her childhood memories.

"Since childhood, I loved to travel. I used to be in Amritsar, and during our summer vacation, I used to go with my father to Kullu Manali. So, hills and mountains have been a part of my life," said Deepti, known for her distinct choice of cinema.

She starred in films like "Angoor", "Chashme Buddoor", "Mirch Masala" and "Damul".

It was her "kind of films" which kept her away from her desire of filming in Kashmir.

"None of my films were shot in Kashmir. In fact, when Subhashji (Subhash Ghai) offered me the role of a mother in 'Saudagar(1991)', I was thrilled because I was getting to shoot in Kashmir. I always thought 'Ek gaana toh hota (There should've been one song at least)'.

"But later one of my friends helped me plan a road trip to Ladakh in 1993. I drove from Mumbai to Ladakh and spent two months, stopping at places and villages, interacting with the people, heard their fascinating stories. I hung-in there. It was like I was on this wanderlust," she recollected with a gleam in her eyes.

On the Bollywood front, she will next be seen in Shekhar Suman's directorial debut "Heartless".