A week back, Banoo Main Teri Dulhann showed the two lead protagonists Sagar and Vidya dying at the hands of Sindoora, leaving all fans and supporters of the show completely distraught and heart-broken. But the fans needn’t be too disappointed as their favourite jodi returns back re-incarnated in a completely different avatar.The Telly Buzz team gives a brief of what the new characters will look like. 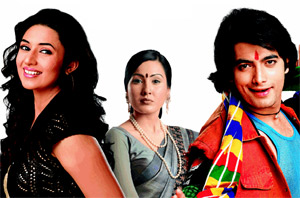 Featured Video
While the previous track showed Sagar as the educated guy and Vidya as the gaanv ki gori, the re-incarnation shows the opposite with Sharad Malhotra playing the role of a village yokel. His character is loosely based on Aamir Khan’s character from Raja Hindustani. Sharad is a tourist guide in Benaras and is very popular amongst kids and women. In spite of not being well educated, he still manages to charm people with his attitude.


Divyanka Tripathi, better known as Vidya, on the other hand, is born and brought up in and lives her life in the lap of luxury, getting whatever she wants. She is a great looker and loves to flaunt this attribute of hers by dressing up and looking good all the time. She is very sweet and innocent and doesn’t like any form of cruelty.

Evil continues to prevail with Sindoora (Kamya Punjabi), being arrogant as ever, but is now shown as a high-class lady who consults an astrologer before doing anything, yet, in her heart feels she is still invincible and can take anyone down. She returns to her old schemeing self when she comes face to face with Sagar.

The death of the protagonists may have been a downer for the show’s fans, but this latest news is bound to leave them elated. Tune into Banoo Mein Teri Dulhann this week, as many surprises begin to unfold.

14 years ago omg, I really can't wwait to see thier new look and they will look sooo much better, esp. vidya.

+ 5
14 years ago guys sorry to say that but they took idea from sonys show kajjal...lets hope it works out

sameer321 14 years ago divyanka looks soooo pretty.........serial is going to be a blockbuster

+ 3
14 years ago Not really fond of the new twist but must say Divyanka is looking really pretty in the new look! :D