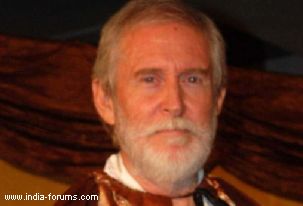 Thespian Tom Alter said that he learnt Urdu from his American Christian missionary father and read the Holy Bible in the language during his childhood days.

Alter recited five verses from the Bible in fluent Urdu in front of a huge and surprised audience, which roared in approval, at the inaugural of the All India Urdu Book Fair held as part of the 10-day Urdu Festival here Saturday night.

"How can Urdu belong to Muslims or any other particular religion when it described God's message with such beauty," Alter said, dismissing wrongly-held contentions that the Urdu language belongs to the Muslim community.

In fact, the Mussoorie-born Alter pointed out that Urdu was born, flourished and enriched in the sub-continent in the pre-Independence era.

Unfortunately, post-Partition in 1947, it faced discrimination in India with a section of people wrongly portraying it as a language of Muslims, Alter added.

"I learnt Urdu from my priest father and there was always an Urdu Bible (translated) on his table. I was mesmerised by the beauty of the Bible in Urdu," Alter said.

The "Aashiqui" actor also declared he had nothing against English, Hindi or any other language.

"While Hindi is the 'Sister language of Urdu', Urdu has a special flavour and power which other languages seem to lack," Alter said amid a huge round of applause.

Referring to fears expressed in some quarters that Urdu was on the decline and had no future, Alter said that on the contrary, Urdu doesn't need our help to survive. He added: "It is we who actually need this language."

During the Urdu Festival, Alter will stage his famous 90-minute solo-play on the late Indian scholar and political leader Maulana Abul Kalam Azad. It revolves around the life and ideology of the great Muslim personality and portrays his clear opposition to the division of India and creation of a separate Pakistan.

Incidentally, since it has certain comments critical to Sardar Vallabhbhai Patel - another historical stalwart and colleague of Azad - the play written and directed by Saeed Alam has been banned in Gujarat.

The 14th Urdu Festival organised by the National Council for Promotion of Urdu Language (NCPUL), was inaugurated Friday in the Muslim-dominated town in Nashik district by union Minority Affairs Minister K. Rahman Khan.