Tina Dutta who essays the protagonist Ichcha in COLORS' Uttaran is today a household name!! But the bitter fact is that the actress has been throwing her weight around for more than four months now, which has left the channel and the production house weary. 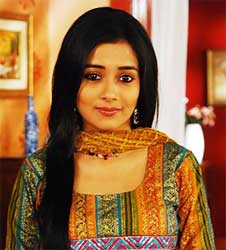 The latest is that Tina has recently put down her papers, and is reluctant to continue with the show, that has given her the much needed name, fame and recognition.

Says a reliable source, "Tina has given her resignation papers to the production house on the 18th of this month. She is presently in the USA for some event. Though the channel has a bank of episodes shot with her, they are now clueless as to whether the actress will return to the show or not. In the meanwhile, the channel has taken the call to look for a suitable replacement".

We also hear that apparently this is not the first time that Tina has put down her papers. She has done it thrice earlier and this is nothing new for the channel and production house.

Our source says, "She has always been troubling the entire team of Uttaran. She has never been on time for her shots, and would never follow her call timings. Even when in the set, she will want things to happen her way. Even after all this, the channel has been patient towards her. But it now looks as though Tina is exceeding all limits. That is why the channel has taken the decision to try for a replacement to play Ichcha".

We hear that auditions are on to find the new face for Ichcha. The channel is very keen on sorting this problem soon, as they have a very good story ahead and they are doing well in the TRP ratings. Tina's repetitive threats and rude behaviour is hampering the shoot pattern, and this in fact has forced the creatives many a times to change the story line to cover up for her absence.

We tried calling Tina Dutta, but her phone was not reachable.

We hope that the channel is successful in taking the final call now!!

jothisathish123 10 years ago ichcha and veer both of them r main role in uttaran serial so u both must stay still end of the uttaran.

+ 2
10 years ago i hv been waiting for veer-ichha reunion...but with replacement the impact will be totally lost...
how can tina behave like this wen this show has given her recognition....
i guess this is because tapasya's character has given much more importance...and that has been really unfair on tina...after all it was supposed to be ichha's life and not tapasya...

10 years ago Doesnt really make a difference but will indeed help ruin the effect of Vee cha :D

10 years ago best news i have heard in a long time!what can i say??
good riddance to bad rubbish!

10 years ago tina pls cme back.....uttaran is incomplete without u

if there is any truth abt ur behaviour

Sreevalli.A.S 10 years ago Hi tina i'm ur big fan. i think u'r chracter is very close to iccha role. bt now i shocked bcz reading of above news. plz don't change u'r real attitude due to pressures. bcz it's spoils u'r name & image. it's shows that iccha's real attitude is like tapsya reel attitude in uttaran & Don't resign. bcz of this serial and role u get a very big name and also u become a very popular. If u resign, it affect on your carrier and u'r upcoming chances. once again plz don't left uttarn team.