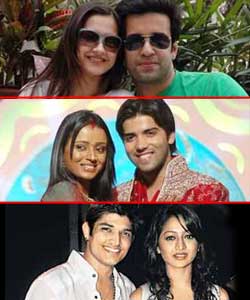 Pihu is in dilemma as of now, and does not know whom to marry. On one hand, she firmly believes that Rudr (Iqbal Khan) is the man made for her from her childhood days, but on the other hand she cannot discount the love and affection shown by the good hearted Abhay (Raunaq Ahuja). As Pihu is unable to take a decision, she leaves it to God to make the decision.

Wondering what Pihu does? Well, she throws a challenge at both of her suitors that she will marry the person who will reach the wedding venue first.

Our source says, "The Maha Episode will have all the elements of fun and masti, intrigue, tension and major drama before Pihu decides on her ultimate suitor. There will be some stunning dance performances coming from celebrities. The cutest couple of television, Aamir Ali and Sanjeeda Sheikh will perform solos. The popular Jodi of Kinshuk Mahajan and Parul Chauhan will yet again be seen together in a performance. Dance India Dance contestants, Vrushali and Mayuresh will dance to a popular Navrathri number".

Aamir will come from the Dulha side, and will dance to Ek Kunwara Phir Gaya Mara, while Sanjeeda will sizzle to the number Mere Haathon Mein Nau Nau Chudiyan Hai. Kinshuk and Parul perform together on Ghoonghat Main Chand Hoga, Mayuresh and Vrushali on the popular Navrathri number Sabse Bada Tera Naam O Sherowali.

Aamir Ali and Sanjeeda confirmed their presence in the Maha episode.

Our source further says, "Iqbal Khan has got back to shooting after a bout of illness. Rudr will be shown struggling with situations as he tries to get to the venue before time to wed his childhood love. Meanwhile, Abhay who is initially reluctant to accept the challenge later decides to take it up as he genuinely loves Pihu. Gauri (Binny Sharma) will play a vital role in this whole drama".

Tonight's episode will also see the entry of Abhay's dad, to be played by Adarsh Gautam. He plays a positive character, who feels that his son is very good at heart and deserves the best in life.

Who will Pihu ultimately marry? What will be hurdles Rudr and Abhay will face as they take up Pihu's challenge?

Lots of questions to be answered in tonight's episode

iheartChai 9 years ago Keep rocking it!

All the best to you!

-Rimsha-sizzles 9 years ago Love you Additi...:D
Keep rocking as Pihu

Depanjan 9 years ago All the best Additi
Keep smiling

lamaa 9 years ago Love you Additi and you are doing great in Sangini. Love Pihu's expressions in the show!

Jaya Saha to be Arrested by the NCB Soon: Report
10 minutes ago

Shaheer Sheikh opens up on getting offers from Bollywood in ...
33 minutes ago

"This NEWS is FALSE, MALICIOUS & MISCHIEVOUS": Nikhil Slams ...
41 minutes ago