'Thoda Pyaar Thoda Magic' is a feel-good album in which Shankar-Ehsaan-Loy have composed five tracks and one remix. Their signature stamp is all over and it surely doesn't dis 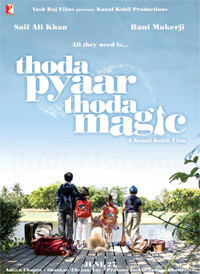 The song 'Lazy lamhe' comes as a surprise and singer Anusha Mani's rendition brings with it a whiff of freshness. A sensuous and seductive number, the track is a slow one with a few contemporary sounds thrown in. Prasoon Joshi's experiment with the lyrics is interesting.

A happy number comes in the form of 'Pyaar ke liye kabhi socha hai kya'. The lyrics are centred on life and love and Shankar Mahadevan's rendition makes you feel good. 'Pyaar Ke...' may not have a lingering effect, but it is still quite an enjoyable song.

'Nihaal ho gayi' picks up pace from the previous two tracks but doesn't excite much. While it has Shankar at the helm once again, he doesn't offer anything innovative. Prasoon's lyrics are the only notable feature in the song, but the music composition is just not fresh enough.

Now being a little innovative, Shankar-Ehsaan-Loy come up with 'Bulbula kyun koi mujhko haath lagaaye', a track that differs from the typical Bollywood pieces. Sung mainly by Sunidhi Chauhan, it gels fairly well with the story.

'Beetey kal se hum' takes off from where 'Bulbula...' left. Shreya Ghoshal and child singers Sneha and Suresh provide vocals for this fun number. Prasoon's lyrics are poetic. Shankar-Ehsaan-Loy have kept it simple and peppy so that it will appeal to adults and children alike.

It is a pleasant album that doesn't boast of major chartbuster hits. But the fact that all five tracks don't hurt the ear and have something fresh and pleasing about them makes the album get a three-star rating.