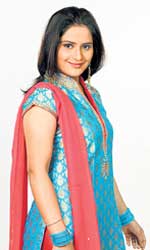 TellyBuzz had earlier reported that Rajan Shahi's Maat Pitaah Ke Charnon Mein Swarg will be ending once it completes its one year run. We had also written that Rose Movies' upcoming show Thoda Hai Bas Thode Ki Zaroorat Hai, which was earlier designed for the afternoon slot on COLORS would either be placed at the 7.30 PM slot replacing Swarg, or it would replace Creative Eye's Yeh Pyaar Na Hoga Kam at the 9 slot, which in turn will be moved to the early evening slot of 7.30 PM.

The latest is that the channel has decided on the last airing date of Swarg, as June 4th.

According to our source, "Swarg will be ending on June 4th. The last shoot date of Swarg is 27th May. The channel has decided not to touch the slot of Yeh Pyaar Na Hoga Kam, as they have been bettering their numbers with every passing week. As a result of this, Thoda Hai Bas Thode Ki Zaroorat Hai will take the 7.30 PM slot, and the launch date is expected to be June 7th".

An actor on terms of anonymity confirmed that Swarg is ending on 4th June.

We tried talking to Rajan Shahi, and even sent him a text message, but he remained unavailable.

Our efforts to get to Producer Shrishti Arya too were in vain.

regularinfo 10 years ago Thanks TB, And thank God YPNHK stays where it is! Good luck to the new show!

Neeba 10 years ago Glad that YPNHK will still be aired at 9pm. Thanks for that.

prettywoman 10 years ago Yipppeee.. great news for all ypnhk lovers.. We get to keep the 9:00pm slot.. TRP's are rising every week.. good news and well done to the entire ypnhk team.. you have maintained the essence of the story and still managed to get good trp's, but keep doing this and don't do drastic changes we all love the simplistic approach and the very believable characters!

Pirated_Fun 10 years ago The reason is SGP at 7:30 pm in Star plus which is also a realistic fresh story like THTKZH

abd_20 10 years ago Swarg would have been in the atfternoon slot!!! but Swarg is failing to rake up its TRP i feel its a fair decision..... but will miss Pracheen Chauhan:(